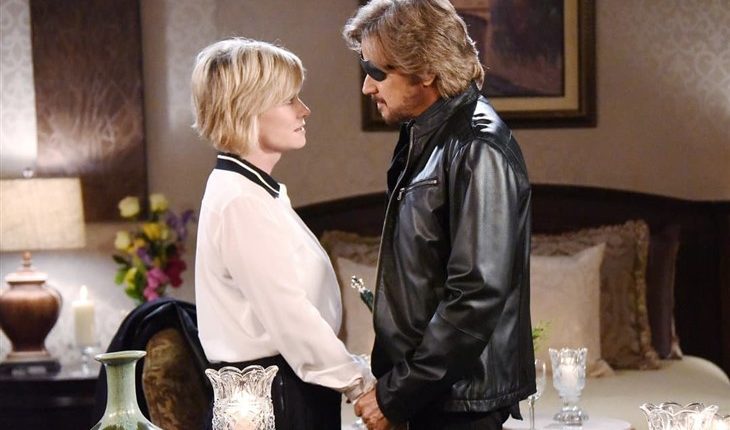 Days of our Lives spoilers reveal that the course of true love is too strong for Kayla Brady (Mary Beth Evans) and Patch Johnson (Stephen Nichols) to be apart! Stayla fans will be happy to hear that their favorite couple finally reunite when Kayla and Justin Kiriakis (Wally Kurth) fail to say their I do’s.

What happens that causes Jayla to change their minds at the last moment? Why doesn’t Kayla, who has been fooling herself about loving the lawyer, go through with her intentions?

We’ve got a few details here, plus some inside words from Nichols as to how he feels about the whole shebang!

Days Of Our Lives Co-EP Says, ‘We Do Not Plan On Ordering Any Blow-Up Dolls’

Nichols talked to Soap Opera Digest about the latest with Stayla saying that his character was completely ready to say goodbye to the love of his life in order for her to find happiness with Justin. He felt “like total crap,” says Nichols. Even though Kayla invited him to the wedding he couldn’t find it in himself to attend.

Instead, he tells his friends goodbye and is prepared to leave Salem not wanting to see Jayla every time he turns around.

Before the ceremony, Justin spills some very sad beans to Kayla about what he did when he thought he saw his dead wife Adrienne Kiriakis (Judi Evans). It is something that opens Kayla’s eyes and makes her realize that she still loves Patch.

As a result, she runs to the airport to find him and according to Nichols, “Steve is in total shock,” and he thinks that she’s there to go away on her honeymoon.

These two crazy kids then start talking and finally come to the mutual realization that they are meant to be together for the rest of their lives–duh!

Days Of Our Lives #DOOL Spoilers: Claire Approaches Ben With A Tempting Offerhttps://t.co/Q1SSxWM6v6

Patch says, “Sweetness … Justin knows you and I are the love of each other’s lives. Just like my sister was his.” They vow not to take their relationship for granted and in a moment of exuberance decide to leave town and lay low for a while.

This is probably a good idea since Justin will be licking his wounds and seeing Stayla would be like rubbing salt in them.