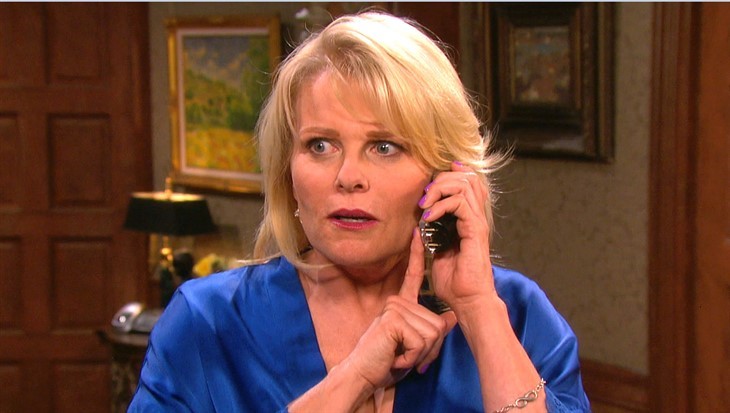 NBC Days of Our Lives spoilers reveal that on Wednesday’s episode, we finally saw Judi Evans return. Even though Justin Kiriakis (Wally Kurth) thought it was Adrienne Kiriakis, it was actually Bonnie Lockhart. During an interview, the actress teased what fans can expect. Evans explained that Bonnie can’t be her authentic self yet.

DOOL spoilers reveal that on Wednesday, we saw Justin absolutely stunned after he called off his wedding to Kayla Brady (Mary Beth Evans). He went to the cemetery to visit Adrienne’s grave, only to come face-to-face with her image. As fans know, it wasn’t Adrienne that Justin was seeing, but her lookalike, Bonnie. In upcoming episodes, we will see Justin kissing who he believes is his resurrected wife.

Days Of Our Lives Spoilers: Brady Had Performance Issues And Eric Martsolf Didn’t Like It!

Speaking to SoapHub, Evans confirmed that she will also be working with Bryan Dattilo, who plays Lucas Horton. The two do have history, but only because Bonnie was impersonating Adrienne. When Adrienne was rescued by Justin and the two reconciled, Lucas ended up heartbroken. However, Bonnie fell for Lucas and according to Soap Opera Digest, still has feelings for him.

Days Of Our Lives Spoilers – Bonnie Lockhart’s Authentic Self

So, what can we expect this time around from Bonnie? Days of Our Lives spoilers reveal that Bonnie is unable to show who she really is just yet. The actress teased,

“Even though I played Bonnie before with him, it was a different version of what was happening. You’ll see the way the story plays out. She can’t really be her authentic self, yet.”

We aren’t sure exactly what that means. Does that indicate she tries to impersonate Adrienne? Or does it mean that nobody really knows that Bonnie is a changed person?

Days of Our Lives Spoilers: Steve and Kayla Leave Salem Together, Will They Be Back? https://t.co/NwPV6QQqMr pic.twitter.com/wbStQITqXw

When talking about working with Kurth and Dattilo, Evans was really excited. Even though these scenes were filmed several months ago, she feels lucky to have been able to work with both actors again. She said,

“Oh my God! How lucky can a girl get, seriously? Two of the nicest guys ever and the nicest guys in the industry. I’m really truly the luckiest person when it comes to guys to work with for sure.”

What do you think is going to happen with Bonnie Lockhart this time around? How involved does she get with Justin Kiriakis and Lucas Horton? We will have to keep watching the NBC soap opera to find out what happens next.