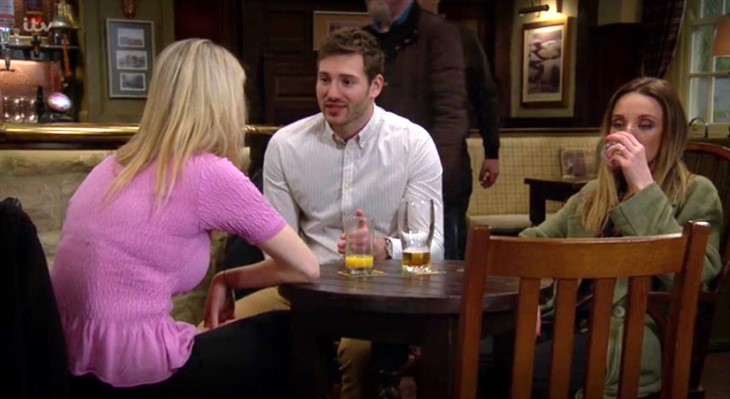 Emmerdale spoilers reveal that Andrea Tate (Anna Nightingale) knows Jamie Tate’s (Alexander Lincoln) secret. After she runs off Belle Dingle (Eden Taylor-Draper) following the hit-and-run, Andrea starts the next phase of her plan. She tries winning over Jamie with date night. Will, he actually falls for her deceptive scheme, be forced to take her back, or will he run?

After Jamie accidentally hits Moira Dingle (Natalie J. Robb) with a car, he is horrified. Andrea tries to convince him it was an animal, but she knows the truth. Jamie is in a state of panic and decides not to say anything. However, he does go to the hospital to ask how Moira is doing after her accident. While there, he tries not to act “off,” but Belle knows something is up.

Emmerdale spoilers reveal that while Jamie is out, Andrea returns home and is there when Belle comes by. Andrea takes advantage of the situation and convinces Belle that she lost. She manipulates the young woman and preys on her fragile emotions. She claims that she is back with Jamie. Of course, Belle is confused, angry, and humiliated. She runs off with tears in her eyes.

Thinking that it will be easier to win back Jamie once Belle is out of the way, Andrea gets to work on her next scheme. She plans an elaborate and romantic date night as a way to lure Jamie back into her arms. However, it won’t be that easy. Belle wasn’t the problem, so getting rid of her won’t help. The problem was Andrea all along, but she refuses to see that.

Live A Lie Or Risk The Truth?

Jamie is terrified of what will happen if he comes forward with the truth. He could risk losing Millie Tate (Willow Bell) forever and might even go to prison. It’s not just that he hit Moira, but didn’t come forward immediately. However, that would require that he stay with Andrea and try to pretend that their relationship is perfectly normal.

Or, he could not live a lie and come forward with the truth. But he could ultimately lose his freedom, but be free of a personal prison with Andrea. Which one will he choose? It seems Andrea might win, but not for long. He won’t be able to live with himself, or with hurting Moira and Belle. Plus, his mother is pretty powerful and will probably get the best defense team to get Jamie out of this tangled mess.