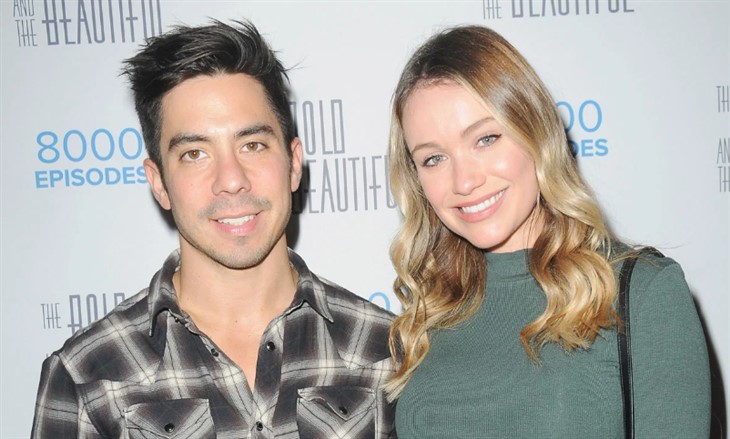 The Bold and the Beautiful spoilers reveal the exciting news that fans will get to see Katrina Bowden’s (Flo Fulton) husband in a scene with her when the show returns to the airwaves. But, alas, it will only be the back of his head that we see!

That’s right, B&B has made good on its promise to use actors’ partners to film close and intimate scenes, and now we can reveal that Bowden’s husband Ben Jorgensen has been tapped to fill in for her reel life boyfriend, Wyatt Spencer (Darin Brooks).

The Bold And The Beautiful Spoilers: Liam & Hope Experience New Stability- While Steffy Moves On When New Episodes Air

It has been widely reported that B&B plans to use star’s partners, mannequins, and maybe a blow-up doll or two as a way of safely filming love scenes. Executive producer Bradley Bell told the Associated Press, “We feel almost like television pioneers all these years later because we’re the first ones out, blazing new ways of producing the shows with the current safety standards, and we’re getting the job done. It’s very exciting!”

How exactly will Jorgensen fill in for Wyatt? Very carefully! Seriously, the plot he is involved in is a major one and one that fans have been anxiously awaiting since lockdown began.

When the show left the airwaves it did so on a jaw-dropping cliffhanger, with Flo being dragged off, unconscious, by Dr. Penny Escobar (Monica Ruiz) and Sally Spectra (Courtney Hope). They were clearly not intending to help the poor victim and we have been curious as to her fate.

Explosive new spoilers now reveal that these two bad girls lock up poor Flo to a radiator and leave her there. The good news is that the day is saved by Wyatt Spencer (Darin Brooks) who finds her and rescues the damsel.

The Bold And The Beautiful Spoilers: A New Lady For Bill Spencer When New B&B Episodes Air? Who Could It Be?https://t.co/xXTJ7EUkTh

The Bold And The Beautiful Spoilers – How Will Katrina Bowden’s Husband Appear On The Show?

Wyatt naturally kisses Flo after he saves her but it will actually be Jorgensen who smooches with the pretty blonde. Bell stated, “It really called for a big embrace and a kiss. So once she was freed, we stopped the tape, Katrina’s husband came in and they finished the scene. We see the back of his head, and I think it’s very convincing it’s really Darin.” Brilliant!