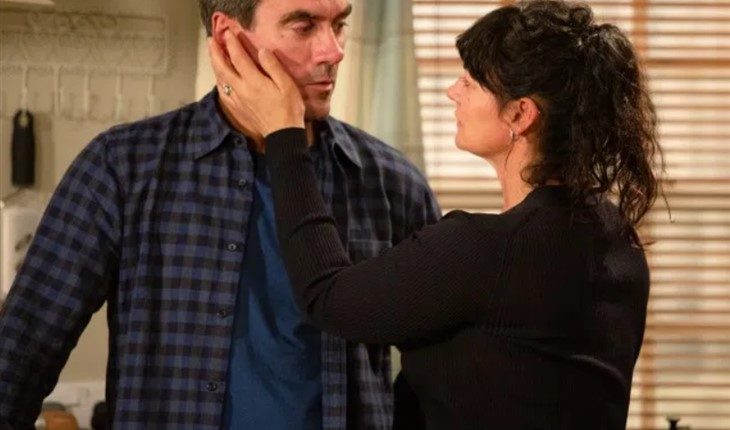 Emmerdale spoilers reveal that Cain Dingle (Jeff Hordley) finally admitted to himself that he has feelings for his ex. Then, Moira Dingle (Natalie J. Robb) was the victim of a hit and run and Cain is staying by her hospital bed. Could the tragic events lead to the former couple getting closer again? Keep reading to find out what Robb had to say about the possibility.

Moira has definitely had her share of major storylines and she is smack in the middle of another one. Actually, it’s a few different plots that are interweaving into one massive story. First, we have Moira not knowing about Nate Robinson (Jurell Carter) and Rhona Goskirk’s (Zoe Henry) deal. Then, she discovered Harriet Finch (Katherine Dow Blyton) and Mark Malone’s (Mark Womack) affair.

Moira was threatened by Malone, but then got hit by a car, who was actually driven by Jamie Tate (Alexander Lincoln) searching for his missing wife. Now that same missing wife, Andrea Tate (Anna Nightingale) is convincing him to keep quiet. She will blackmail him into staying with her or she’ll go to the cops. Did we mention Belle Dingle’s (Eden Taylor-Draper) heartbroken?

Emmerdale spoilers reveal that the lockdown special confirmed Cain does still have feelings for Moira. However, things are different now and even if she still loved him too, so much has happened. Could they really go back to the place where they were as a couple? So far, he has kept his heart to himself.

There are many times when tragedy seems to build a bridge, mend relationships, and make people realize what’s truly important. This could be the case for Cain and Moira. Of course, that just might be wishful thinking too. What does actress Natalie J. Robb think about it?

According to Digital Spy, Robb believes that the hit and run night prompt Cain to act when he realizes that she could die. She explained,

“(Moira’s condition) is life-threatening and I think that might be another reason why you’ll see maybe why Cain realizes how much he feels for her when he realizes he may lose her, perhaps. I think it might draw them closer, what the outcome will be after that, I don’t know, but I think there may be more of a friendship there because she’s not being the best to him but they have got a lot of things to get over.”

Would you like to see Cain and Moira reunite? Should they take another stab at romance or just start things off as a friendship?