The Bold And The Beautiful Spoilers: Zoe And Carter Bond – Will They Fall In Love? 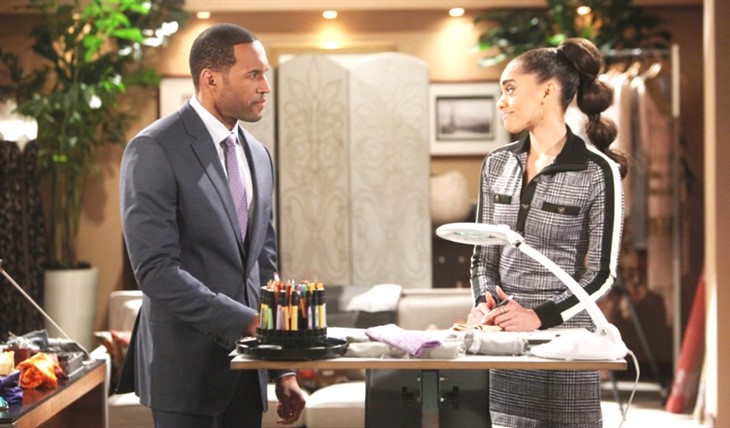 The Bold and the Beautiful spoilers reveal that Zoe Buckingham (Kiara Barnes) and Carter Walton (Lawrence Saint-Victor) bond. The two talk about Thomas Forrester’s (Matthew Atkinson) downfall. Could this be the beginning of a new romance for both of them, and a real love for Zoe? Keep reading to find out more information about this storyline.

The Bold And The Beautiful Spoilers – Thomas Forrester’s Fake Romance

B&B spoilers reveal that Zoe finally figured out that Thomas didn’t really love her. The marriage proposal and the entire whirlwind romance was just a scheme to get him Hope Logan (Annika Noelle). She ended up calling him out on it at the wedding. His manipulation was finally exposed in front of everyone.

Fans couldn’t help but notice that Carter seemed to have a crush on Zoe. He told her she was attractive and said he respected her owning what she did. He admired that Zoe was trying to turn her life around and get on the right track. But he also warned her about dating Thomas. Fans were confident that Carter and Zoe might eventually become a couple. It seems we are one step closer to that becoming a reality.

The Bold And The Beautiful Spoilers – Bonding With Zoe Buckingham

The Bold and the Beautiful spoilers from Soap Opera Digest indicate that Carter and Zoe will have some bonding time. They will discuss Thomas’ downfall, Hope getting back together with Liam Spencer (Scott Clifton), and more. Then, the two will get an update on Sally Spectra (Courtney Hope), as well as Wyatt Spencer (Darin Brooks) and Flo Fulton’s (Katrina Bowden) activities.

It seems that if Carter and Zoe are spending so much time talking about everything that has happened, it could lead to a romance. They do look good together and they seem to have a connection. So, maybe this will turn into a real love story for the two characters.

The Bold And The Beautiful News Update: Adrienne Frantz Adds A Little Lion Cub To Her Family – See Pics!https://t.co/sNsNg5rz3b

What do you think of Carter and Zoe? Would you like to see the two of them become a couple? What challenges do you think they will face if they embark on a romantic journey? We will find out soon enough because new episodes will return to CBS on Monday, June 20.

The Bold and the Beautiful (B&B) Spoilers: Steffy & Finn Get Family…