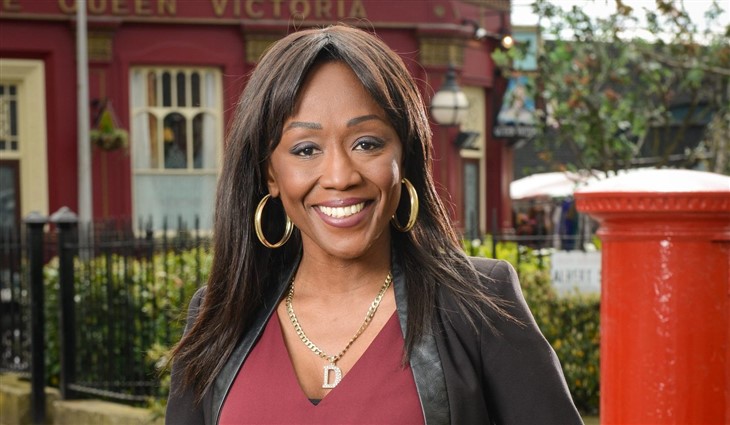 She went on to say, “It’s been tricky. Actors intrinsically have to be free, they have to be tactile and uninhibited. And when you place inhibition on an actor, it can sometimes be hard to be comfortable playing a scene out. You’ve got a third eye on yourself because you’re aware of the things you can’t do.” She went on to say, “The thing I was taught when I was learning was to leave yourself alone as an actor, and this is the antithesis of that. You have to be very aware of yourself so that you don’t touch the wrong thing, or throw your arms around somebody, or walk too close. We have to adhere to those things for our safety. It’s difficult but it’s possible.”

“But it’s good to be working. That’s the important thing for many of us in soap at the moment, is that we are part of a very privileged group in our industry who have jobs to go back to. So I’m grateful for that.”

“Denise would have killed Kim, or she would have moved into the shed. They would have had to live at opposite ends of the house because Kim and Denise are the antitheses of each other. They absolutely adore each other, and can’t really be apart for very long.

But Kim has matured a great deal, having her children now, has brought her up on a level with Denise in terms of being less of a party girl and more empathetic with Denise and who she’s had to be from quite a young age.”