The Bold And The Beautiful Spoilers: One Reveal That Doesn’t Go As Expected On B&B – Bill Makes Surprising Choice? 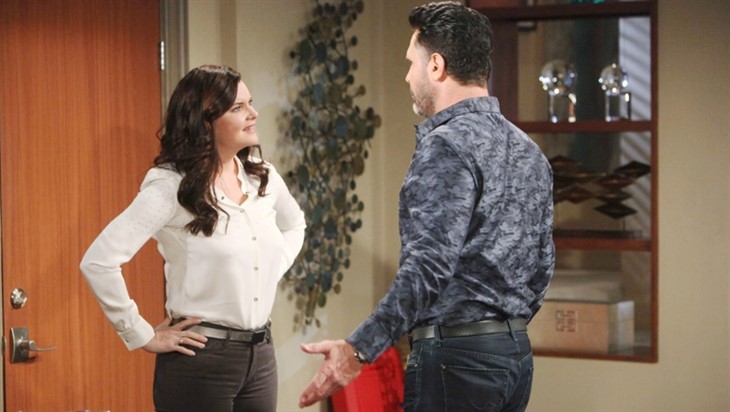 CBS The Bold and the Beautiful spoilers document that Bill Spencer (Don Diamont) was beside himself after Katie Logan (Heather Tom) learned what he did. His reveal kiss with Brooke Logan (Katherine Kelly Lang) strongly indicated that Tom’s character would make the decision as to whether Batie remained together or split.

However, further developments can be written into the script that will shift the choice to Bill. That type of outcome would have him skirting the deliberation process and reviving Brill.

The Bold And The Beautiful Spoilers – Katie Logan Totally Justified

Anyone would have been upset and humiliated by what Katie was forced to witness within the digital frame at her sister’s house. Seeing Bill in yet another romantic situation with Brooke was incredibly outrageous, in that it followed other instances of that pairing betraying their loved ones.

Katie’s brief outburst, at the intended Bridge reunion party, was followed by an understandable conclusion that she thought would never be reached. Bill and Brooke seem incapable of keeping themselves away from each other at sporadic moments of real or perceived turmoil. While Katie doesn’t doubt that Bill loves her, she also knows that an unknown percentage of his heart is reserved for Brooke.

Las Vegas, Nevada, may prove to be the location where Ridge Forrester (Thorsten Kaye) married Shauna Fulton (Denise Richards). Fans know that Richards recently indicated that her character and Kaye’s tied the knot in Vegas, which took place just as the last new episodes of the show were seen in late April.

If Richards’ words bear out in the plot, Ridge may have filed divorce papers prior to jetting to Nevada. Brooke will certainly become aware of her legal break from Ridge and her ex-husband’s fresh nuptial. Lang’s character would also recognize her single status.

The Bold And The Beautiful Spoilers – Bill Spencer Takes Control

B&B fans know how hard Bill worked to reestablish his relationship with Katie. She came to trust him again, which is why Katie moved with their son, Will Spencer (Finnegan George), back to Bill’s mansion.

Devoted viewers knew that the lack of a realized Batie remarriage meant that a variety of factors could upset the latest reunion between this duo. This couple’s train wasn’t derailed by what happened between Bill and Brooke in the cabin. Instead, their relationship was at least imperiled by Shauna having recorded their kiss and Quinn Fuller Forrester (Rena Sofer) using that video as a weapon in an orchestrated, maximum effect moment.

Projecting Bill as the character who causes the official end of Batie, by coupling with Brooke before Katie makes her final decision, would provide a compelling outcome.

Soap Opera Spy is a leading source for everything linked to The Bold and the Beautiful. Check back regularly for B&B spoilers and news!