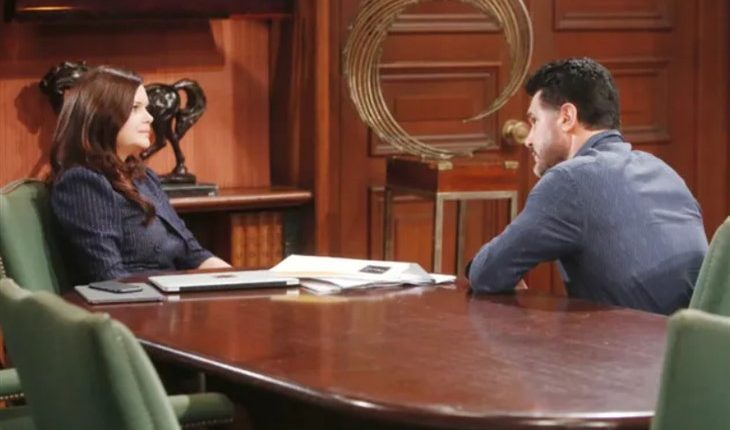 CBS The Bold and the Beautiful – Bill Spencer (Don Diamont) Katie Logan (Heather Tom)  spoilers tease that Bill Spencer (Don Diamont) will plead with Katie Logan (Heather Tom) to keep their family together when the second new episode of B&B is seen on July 21. The resumption of new shows begins next week following a three-plus month production shutdown.

As available episode previews indicate, Bill tells Katie that he’ll accept whatever she wants to do regarding his having kissed Brooke Logan (Katherine Kelly Lang). But he’ll refuse to allow Tom’s character to decide that Batie is over. That stance will force Katie to respond, as she expressed her belief in controlling this choice when viewers last saw these characters in April.

The Bold And The Beautiful Spoilers – Brill Can’t Stay Apart

It’s understandable that a formerly married couple would maintain some positive feelings. Sometimes relationships end, but a portion, or even more, of love can naturally remain.

Bill and Brooke have a well-established history of turning to each other. That bond appears to indicate, if not outright confirm, that they have a continuing emotional relationship, rather than one that would be described in the past tense.

The Bold And The Beautiful Spoilers: Zoe And Carter Bond – Will They Fall In Love?

She loves Diamont’s character. So, that’s not the issue. Katie also knows that he loves her and is a good father to their son, Will Spencer (Finnegan George).

But the question is whether Katie occupies the completeness of Bill’s heart? His repeated actions indicate that she doesn’t.

The Bold And The Beautiful Spoilers – Crisis Creates Clarity On Both Sides?

Next week’s new episodes will also include Bill accidentally hitting Steffy Forrester (Jacqueline MacInnes Wood) in his car. The motorcycle accident will be serious, resulting in Steffy’s hospitalization and a seeming period of concern for her welfare.

The described soapy scenario will naturally create an opportunity for clarity. Bill and Katie can balance the crisis versus the lack of judgment in the cabin and choice to deal with what could be an addressable situation.

The Bold And The Beautiful Spoilers: 'Bad Sally' Meant To Build Empathy For Flo, But Will It Work? #bb #boldandbeautifulhttps://t.co/UGU0J87658

While Steffy’s life will be in Dr. John Finnegan’s (Tanner Novlan) hands, Batie’s future is controlled by what Katie and Bill decided to do. Fans of Tom and Diamont’s alter egos are hopeful that a mutual resolution is pursued.