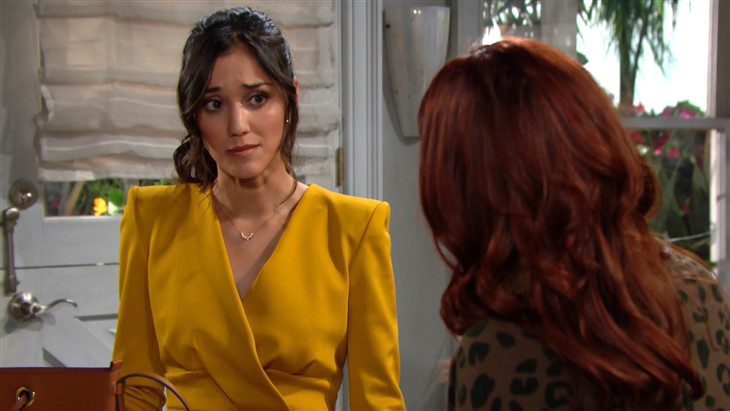 The Bold And The Beautiful Spoilers – Sally Spectra’s New Scheme

B&B spoilers reveal that Sally tells Penny and Flo about her plan to seduce Wyatt and get pregnant. Flo is shocked at how far Sally is going to get back her ex-fiance. However, she is powerless to stop her since she’s tied up to a radiator.

It is teased that when Penny learns Sally’s next move, she tries to use logic with her friend. Unfortunately, Sally can’t be reasoned with and it’s clear that she has gone insane. She has no intention of giving up.

Penny knows that they have already gone way too far with this scheme. She wanted to end it when Flo started asking questions. She nearly told Wyatt the truth at one point. Each time that the doctor wants to end it, Sally rages about why they have to continue. She always makes sure to bring up Penny’s dream career as a way to keep her involved.

However, Penny knows this has gone on long enough and fears what could happen next.

The Bold And The Beautiful Spoilers – Flo Fulton’s Desperate Plea

The Bold and the Beautiful spoilers indicate that Flo will try and get Sally to set her free. However, her attempts fail and Sally goes to seduce Wyatt. It is possible Penny stays behind to make sure that Flo doesn’t scream or get free.

Flo has tried to reason with Penny before when she was looking into why Sally wouldn’t get treatment. Flo has a way of getting to Penny. With this plan going overboard, leaving the doctor alone with the hostage could be Sally’s downfall. We know that she won’t set her free, but could she convince Penny to let her send a message?

Flo sends Wyatt a “secret message.” Sally would notice if she saw a call or text from Flo. So, could Penny let the hostage use her phone? That might be what is meant by a secret message. Plus, it is probably worded in a way that doesn’t alarm Sally, but Wyatt could decipher.

The Bold and the Beautiful Comings and Goings: Biggest Return in History, Doctor Love, and Bad Medicinehttps://t.co/KOxrnVbc3W#TheboldandtheBeautiful #CBSdaytime @BandB_CBS

By letting Flo send a message, it would end the scheme and prevent Penny from going to prison. She can’t untie Flo because Sally would turn her rage on the doctor. She knows that the designer is having a psychotic break. This plan went from reminding Wyatt what a great couple they were to committing crimes. Plus, Sally is no longer thinking clearly. She’s out of control and it’s only a matter of time before Sally completely snaps.