Days Of Our Lives Spoilers: ‘Cin’ Faces Multiple Foes, And One From Ancient History 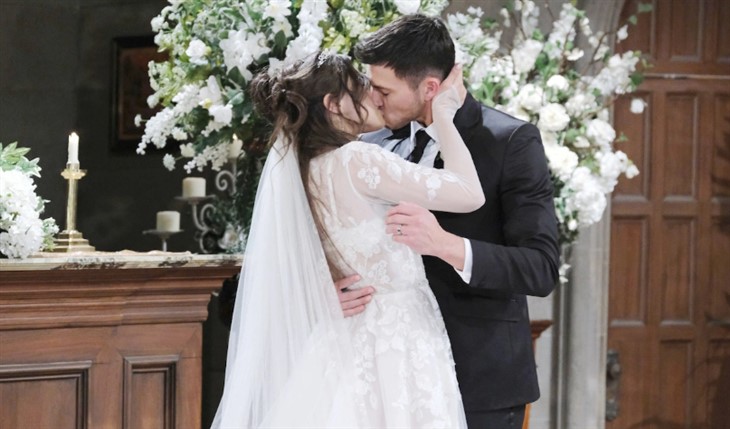 NBC Days of Our Lives spoilers reveal that Ben Weston (Robert Scott Wilson) and Ciara Brady (Victoria Konefal) get married. However, immediately following “Cin” saying “I do,” everything blows up! The actors hinted more than one enemy will return, including one from ancient history. Could this be someone not from Ben’s history, but Ciara’s troubled teen years?

Days Of Our Lives Spoilers – Not Just One Enemy Returning

TV Insider spoke to Wilson and Konefal about the upcoming storyline. The actor who plays Ben confirmed there is someone returning that we haven’t seen in a while. However, he used it in the plural sense, indicating there might be more than one enemy resurfacing. “Absolutely. Some very familiar faces.”

Days Of Our Lives Spoilers: Will and Sonny’s Move Forward, Adoption Gets Messy?

We know that someone kidnaps Ben, holds him hostage, and the identity of the captor is supposed to be surprising. The soap has been careful to use gender-neutral terms when teasing the kidnapping. So, it could be a man or a woman.

Days of Our Lives spoilers reveal that Konefal confirmed that there are familiar faces from the past. However, she indicated that the enemy could go back further than we think. During the remote video interview, Konefal was sitting outside in a wooded area that looked pretty isolated. After the term “out of the woodwork” was used, she turned to look behind her and teased, “Yeah, WAY back in the woods, back where I am, way back in the woodworks, WAY back!”

Wilson chimed in and used his voice to accentuate ancient history, “Way in the WAY WAY woods!”

Days Of Our Lives Spoilers – It’s Not Eve Donovan

Eve Donovan (Kassie DePaiva) was speculated to be the person who goes after “Cin.” She has always sought to avenge the death of her daughter, Paige Larson (True O’Brien). The young lady was murdered during Ben’s serial killer storyline. However, she has come and gone since then, so she might not be the person Wilson and Konefal are referring to. It might not even be someone who has an issue with Ben.

Looking at ancient history, before Konefal came on board, Ciara was played by Vivian Jovanni. She ended up being raped by Chase Jennings (Jonathan McClendon), who was about to become her stepbrother. Ciara struggled a lot due to sexual assault. Eventually, Chase avoided prison by his lawyer father, Aiden Jennings (Daniel Cosgrove) negotiating in-patient psychiatric treatment.

That is ancient history and it hasn’t been mentioned in years. Maybe Chase blames Ciara for his ruined life. He might even still have romantic fantasies of Ciara and think it should be him marrying her, not Ben. Perhaps that is who is responsible for the bomb, kidnapping Ben, and their “horrifyingly shocking demand.”

Days Of Our Lives Spoilers: Roman And Kate Get A Surprise Visit From Rex Brady

Days Of Our Lives Spoilers: Kate Admits To Threat, Is She Helping Philip Frame Brady?

Days Of Our Lives Drops First Photos For Holiday Movie