This Was The ‘Secret’ Theme Of Princess Beatrice’s Wedding 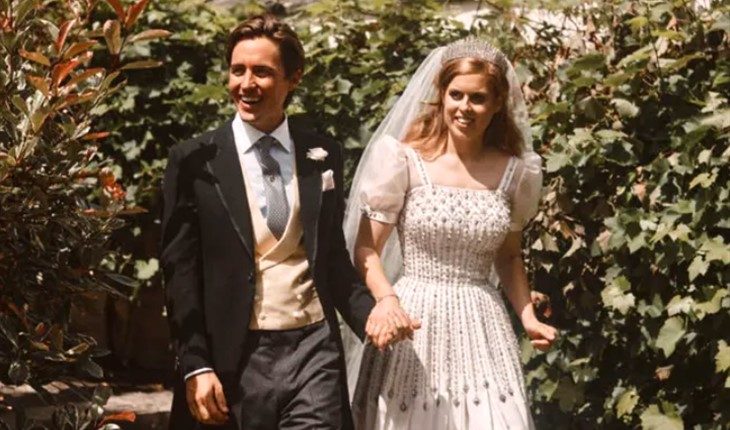 The world now knows that Princess Beatrice married her longtime beau Edoardo Mapelli Mozzi in a small and private ceremony Friday, July 17. What we do not know are very many of the details as they have been kept confidential, reportedly so as not to interfere with Queen Elizabeth’s meeting with the legendary Tom Moore which took place on the same day.

National hero Captain Sir Tom Moore was presented with a knighthood by Her Majesty at Castle Hotel Windsor. The veteran was honored for his incredible feat of raising £33million for the NHS, all by doing continual walking laps in his backyard.

Princess Beatrice Is A Brand New Stepmother And Is Thrilled!

Did Princess Beatrice’s Wedding Have A Certain Floral Theme?

It has been reported that the queen did not want to do anything to take away from her recognition of Moore, and that may be the case as few details have emerged about her granddaughter’s wedding.

What we do know is that it took place during a private and small service in Windsor, followed by an intimate reception.

Princess Beatrice was originally set to marry on May 29 in London, with an outdoor reception at Buckingham Palace. Both events were sure to have been lavish and extravagant as well as highly publicized. But the coronavirus pandemic shut down those plans as it has shut down most activities worldwide.

The Coronavirus Pandemic Forced Princess Beatrice To Postpone Her Nuptials

Instead, Beatrice and Edo married in a decidedly small scale, lowkey service which one source described to Town & Country as having a special theme.

According to the source, Beatrice chose a “secret garden” theme. The source added that a “small reception” was then given at the Royal Chapel of All Saints at Royal Lodge.

Apparently no more than 20 people were invited to the event. Although the wedding was a surprise to the public, the source relayed that it had been, “planned for some time” and “planned around the Queen’s schedule.” It has also been reported that Edo’s son Wolfie was given an “important role” in the ceremony.

While the couple has not yet posted photos of their happy day, it is expected that they will do so eventually. On Friday Buckingham Palace confirmed the nuptial news with this statement:

“The private wedding ceremony of Princess Beatrice and Mr. Edoardo Mapelli Mozzi took place at 11 am on Friday 17th July at The Royal Chapel of All Saints at Royal Lodge, Windsor. The small ceremony was attended by The Queen, The Duke of Edinburgh, and close family. The wedding took place in accordance with all relevant Government Guidelines.”