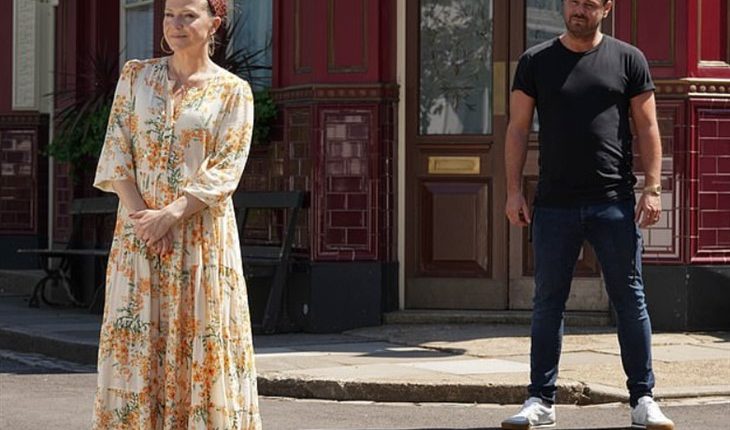 Eastenders have to follow safety protocols like other televised productions. However, due to social distancing, certain scenes are challenging to film. So, the soap has gotten creative! Like the US soap, The Bold and the Beautiful, mannequins are being used. Keep reading to get all the details on the soap’s creativity!

Eastenders has resumed production, but BBC requires social distancing during filming. This can be challenging with certain storylines. Fighting scenes, romantic plots, and even the pub setting mean improvising.

Eastenders actress Luisa Bradshaw-White, who plays Tina Carter, shared some photos of how life on set has changed. On Twitter (via The Sun; the original post has been deleted), she posted a picture of herself at Queen Vic with a busty mannequin, who was standing in for Mick Carter (Danny Dyer). She wrote,

“The new normal onset. Me and @officialdannydyer It’s either that or a tennis ball on a pole…I went for the DD t*ts….”

Film sets in the UK, Canada, and the United States are all getting creative to overcome the challenges imposed by the safety rules. The Bold and the Beautiful went viral for using mannequins, as well as blow-up dolls. It is also bringing on actors’ real-life partners as “romantic body doubles” for kissing and sex scenes.

Other productions are rewriting scripts, as well as using light and shadow to “trick” viewers. There are also creative camera angles that can be used to make it seem as if characters are closer together than they actually are. Splicing and fusing separate scenes together is another method, and camera operators are taking advantage of the “zoom” feature.

Although filming restarted on June 29, we won’t see new episodes until September. When the coronavirus pandemic shut down production and sent the world into lockdown, the network adjusted the broadcast schedule. The number of episodes aired per week was reduced in order to keep the soap on the air as long as possible. The last new episode of Eastenders aired on June 16 before it went off the air for the first time in 35 years.

In the meantime, BBC aired classic episodes and is now broadcasting a spin-off special, Secrets From The Square to keep viewers interested. The strategy is working and each segment features special guests and actors who chat with host Stacey Dooley. They talk about past storylines, funny moments, and tease what to expect when the soap returns.

Be sure to catch up on everything happening with the soap snow. Come back here often for Eastenders spoilers, news, and updates.