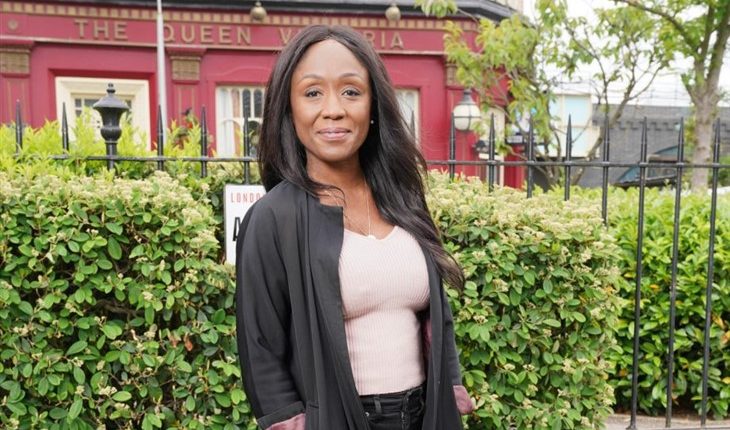 EastEnders spoilers tease that Denise Fox (Diane Parish) will soon confront some nasty realities when her past comes back to haunt her.

Parish revealed the news about her character on the EastEnders spinoff, Secrets From The Square. Specifically, she said that later in the year, “dark things from the past,” would come to the surface and that she would have no choice but to deal with them.

Ever since she divulged this tidbit fans have been speculating about just what in Fox’s past will rear its head since there is no shortage of skeletons from Denise’s closet.

Some fans think that this means her adopted son will come looking for her while others think that her kidnapper may be released from prison.

Could her child Raymond be on his way? Raymond is the result of a fling with bad guy Phil Mitchell (Steve McFadden).

Denise’s sister wanted to adopt the baby but this request resulted in an epic argument. Denise told no one who the baby daddy was and in light of the lack of info, most people assumed it was her ex-boyfriend Buster Briggs (Karl Howman).

Eventually, Phil learned the truth and he and Denise agreed to put the baby up for adoption. Later Denise admitted to Mick Carter (Danny Dyer) that she was sorry she did not keep and raise her baby. If Raymond returns, how will Denise react?

EastEnders Spoilers – How Will Kim Fox Handle Matters When She Returns Later This Year?

Denise’s sister Kim Fox (Tameka Empson) returns to Walford later in the year. The sisters did not part on good terms so their meet up will be full of tension and drama.

Not only did they fight over the adoption of Raymond, but they have gone at it over romantic entanglements as well.

Then again her torment could spring from the return of serial killer Lucas Johnson (Don Gilet). At one point he kidnapped Denise and told everyone she was dead, going so far as to have a funeral for her! he later changed his mind, let her go and her reappearance blew her family’s collective mind.

This trauma was one that lingered on for Denise, so his reappearance could be a mighty moment of reckoning.

Tell us what you think Denise will confront later in the year!

Be sure to catch up on everything happening with Eastenders right now. Come back here often for EastEnders spoilers, news, and updates.