The Bold And The Beautiful Spoilers: Shauna Lead Lady In Ridge’s Life – Brooke Fights For Her Man? 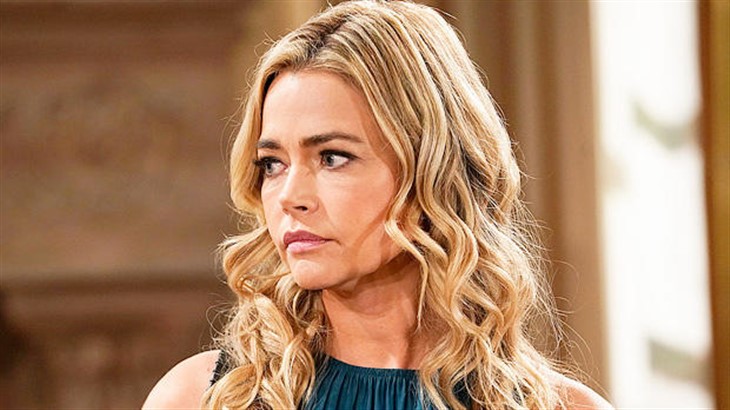 The Bold and the Beautiful spoilers tease that Brooke Logan (Katherine Kelly Lang) will lash back if, in fact, her new, lead rival’s name is Shauna Fulton Forrester (Denise Richards). Buzz indicates that Richards’ character and Ridge Forrester (Thorsten Kaye) were married in Las Vegas, Nevada.

The Bold And The Beautiful Spoilers – Legality And Possibilities Considered

Whether the supposed Vegas marriage was legal is a good question. If Ridge hadn’t filed the completed divorce papers that he and Brooke signed, then he wouldn’t have been able to officially marry Shauna, or anyone else.

The fact that both Ridge and Shauna were feeling their oats, during a night of drinking on the gambling strip, probably would allow the assumed nuptials to be voided. But Kaye’s character has already fallen for Shauna. So a Bridge divorce still feels likely, which would then leave Ridge officially single.

Brooke was incensed that Shauna became emotionally involved with Ridge. She proceeded to slap Shauna’s face hard in front of Quinn Fuller Forrester (Rena Sofer), who responded in kind to Brooke in defense of her friend.

Those specific incidents marked the battle lines and appear, in retrospect, to represent the official baton passing from Taylor to Shauna. Brooke would also likely agree with this timeline assessment.

Brooke didn’t lose Ridge to Shauna when the seemingly forming Shidge was in Vegas. No, Lang’s character realized that the love of her life was slipping away long before that trip.

The trouble that Thomas Forrester (Matthew Atkinson) stirred between his dad and Brooke, combined with Shauna’s interest in Ridge and Quinn’s digital upload of the cabin kiss combined to create what appears to be the latest Bridge collapse. But Brooke still holds some cards.

She’s the mother of R.J. Forrester (Anthony Turpel). So, Turpel’s return to the cast, or a recast of this role, could feasibly create a wedge character.

Brooke continues to think badly of Flo Fulton (Katrina Bowden), due to her involvement in the Beth Spencer (Madeline Valdez and River Davidson) debacle. So, some type of proxy reprisal would impact Shauna.

The Bold and the Beautiful Spoilers: Steffy “Kidnaps” Liam Before His Wedding – Hope Is Busy Caring For Stephaniehttps://t.co/3akExbNzTT

But Brooke also has a history of reviving her relationships with Ridge, which is the greatest threat Shauna faces. And, as fans recall, Richards’ character feared to have her heart broken by Ridge because she felt he would repeat his pattern of eventually returning to his one true love.