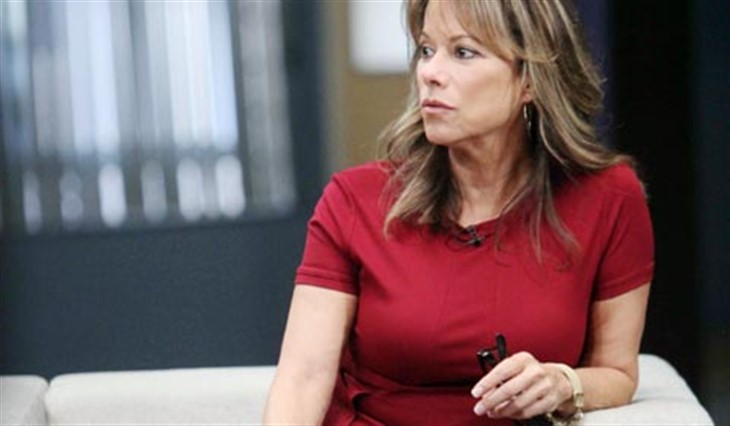 General Hospital spoilers indicate that by all accounts the ABC sudser is now in its second week of production following the coronavirus induced shutdown. Many stars have posted on social media about their happiness to be back including Steve Burton (Jason Morgan) and Joe Flanigan (Neil Byrne).

Now Emmy winning Nancy Lee Grahn (Alexis Davis) has joined the fray in talking about her return with her fans.

She tweeted, “1st day back. The uncompromising detail & apparent hard work of all involved have my deepest respect. I felt safe, protected & more importantly that my being there was safe for others. Organizing this took epic care & I applaud all involved @GeneralHospital @Disney @ABCNetwork.”

1st day back. The uncompromising detail & apparent hard work of all involved have my deepest respect. I felt safe, protected & more importantly that my being there was safe for others. Organizing this took epic care & I applaud all involved @GeneralHospital @Disney @ABCNetwork

Nancy has made public her strong views on wearing masks in this time of slow reopening. Nancy, like many others, thinks that the simple act of wearing a face mask in public has the potential to save lives, including the life of the person wearing it.

CBS’s The Bold and the Beautiful was the first U.S. soap to return to work and the next was its sister show, The Young and the Restless. Which makes GH the third soap to get back to the set, and Days of our Lives is scheduled to return to filming around the first of September.

The new episodes that have been filmed are scheduled to begin airing on August 3, which seems like an eternity, doesn’t it?!

B&B began airing new content last week after getting busy onset in July. As of this writing, we do not have a target date for when Y&R expects to launch fresh content. DOOL was the only one of the four soaps to not air repeats due to running out of original programming. The show films so far in advance, that it has been able to continue showing fans new episodes.

General Hospital Spoilers – What Will Alexis Davis Be Doing When The Show Returns?

One of the major storylines to be picked up has to do with a legal eagle, Alexis. She has been disbarred after lying about sleeping with her one-time shrink Neil Byrne. Neil has had his license revoked as well, and fans are waiting to see if these two unite in misery or decide the other one is just too much trouble!