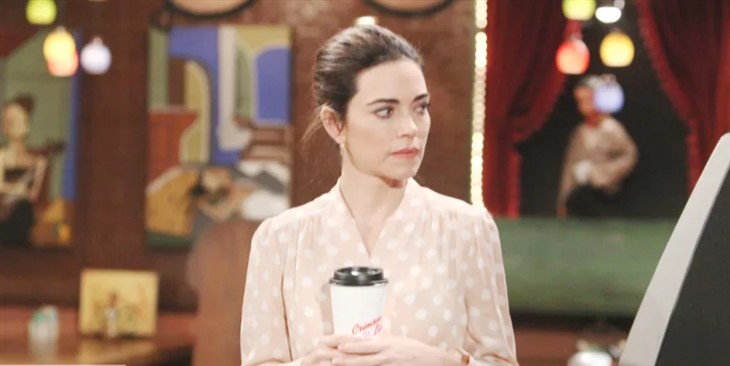 The Young and the Restless spoilers document that Vickie Newman (Amelia Heinle) will maintain control of Newman Enterprises while her father and brother engage in continued battling. As viewers recall, Heinle’s character lost and then regained the Chief Executive Officer’s spot at the family business within a matter of days in the spring.

The production shutdown in mid-March meant that the last new episodes of Y&R were seen in late April. Now, with the actors and crew back to work the past few weeks, new episodes will be seen in August.

Personal skirmishes between Victor Newman (Eric Braeden), Adam Newman (Mark Grossman), and possibly, Nick Newman (Joshua Morrow) will persist when viewers see Genoa City, Wisconsin’s, most famous family again. But the most measured member of the Newman clan will keep her nose to the grindstone in the meantime.

The Young and The Restless News Update: Y&R Alum Eva Longoria Has Something To Celebrate

The Young And The Restless Spoilers – Pitch Was A Clear Strike

Vickie threw a hard fastball at Victor in the recent past. She directly told her father that if he didn’t give her the CEO’s post that she would leave the company.

Victor was overjoyed that his namesake did as he would have done in asserting her right to power. She’d earned his respect with that perfect strike pitch and therefore won the job.

Adam isn’t all there, as the Newman’s and their observers know. If he isn’t griping about some old grudge, he’s inventing some problem.

Grossman has proven to be a fine addition to the cast, as he’s created his own version of this legacy character in modern times. This edition of Adam tried to seize power from Vickie by intimidating Victor into turning over the keys to the family conglomerate. His efforts failed badly, with Braeden’s character lamenting that his youngest son was seemingly incapable of self-awareness.

Adam has convinced himself that Victor was responsible for Alyssa Montalvo’s (Maria DiDomenico) father being killed in Kansas many years ago on the farm. Adam’s childhood involvement in that situation will soon be topped by his self-defense actions in Las Vegas, Nevada, that also resulted in another man’s death.

He’s made many mistakes over the years, but Victor has also sacrificed greatly for his children and provided them with many opportunities on countless occasions. It’s quite clear that choosing Vickie to head Newman was the best possible choice, as Adam isn’t capable of handling power.

The Young And The Restless Spoilers: Nikki Fears For Victor's Health, Frightened Adam Will Turn On Dad #yr #youngandrestless https://t.co/Rz2PHyN0OJ

While interpersonal issues will likely continue to rage, at least the business Victor built from the ground up is in good hands with Victoria. Of course, that’s another plot point that needlessly enrages Adam.