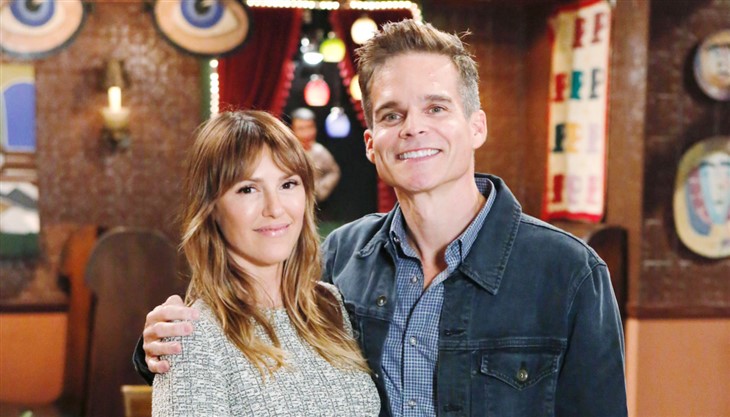 The Young and the Restless – Chloe Mitchell (Elizabeth Hendrickson) Kevin Fisher (Greg Rikaart)  spoilers document that Chloe Mitchell (Elizabeth Hendrickson) and Kevin Fisher (Greg Rikaart) were expecting their second child in early May. But the production shutdown caused the last new episode of Y&R to be broadcast in late April.

With a three-plus month pause since viewers last saw them, Khloe is bound to take center stage when new episodes resume. Viewers will learn whether Chloe gave birth in the recent past, or she’ll deliver her third child when new episodes are seen in August.

Classic episodes have allowed a good deal of time to be devoted to characters that haven’t been seen as regularly in recent years. The ebbs and flows of the soap business often result in various familiar faces being sidelined.

Hardcore viewers and newer fans have seen that Kevin’s darker days were rather intense. And, Rikaart’s character was off-balance long before he met Chloe.

Kevin’s character committed numerous crimes that were driven, in part, by the terrible childhood he faced. However, consequences were eventually applied and he became a better man as a result.

It’s been a number of years since Kevin morphed into his alter ego. The chipmunk persona was a projection of the demons he faced but hadn’t overcome.

Eventually, as Khloe was forming, Hendrickson’s character joined Kevin’s criminal pursuits. Chloe’s instability was later evidencing in more dire circumstances, as she tried to kill Adam Newman (as then played by Justin Hartley) by blowing him up in a cabin. Her efforts weren’t successful but did cause Adam (as now played by Mark Grossman) to suffer memory loss.

Chloe and Kevin’s first child, Bella Mitchell (Martie Blair), proved key to her mother avoiding prison. Victor Newman (Eric Braeden) took pity on Bella. He didn’t want her to be separated from his parents, as he was from his as a child. That considered choice allowed Chloe to avoid the consequences of her actions. She and Kevin left town in 2017 and returned in 2019.

Khloe’s sincere desire to be better led to the expansion of their family, with their next child set to arrive in the spring.

The Young And The Restless Spoilers – Controlled Chaos Ahead?

While Chloe and Kevin are moving into middle-age status, they still retain the potential to cause mayhem. So, Y&R may create some form of controlled chaos in the near future that would allow both terrific actors to pursue further adventure.

Kevin’s computer skills can always be put to use. Chloe has a creative flair that would fit perfectly with her renewed friends, Chelsea Lawson (Melissa Claire Egan), efforts.

It wouldn’t seem right to have Khloe go full chipmunk again. But some mischievous fun could easily be written into the script for both characters.