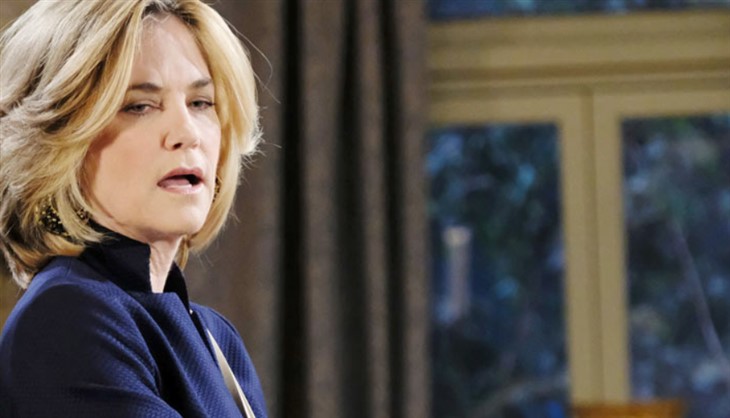 Days of Our Lives comings and goings teased that Kassie DePaiva was going to return as Eve Donovan. She returned this week with a bang and now has revealed her sinister plans for “Cin.” During an interview, the actress talked about the shocking storyline, Eve’s revenge, and being upgraded to supervillain status. Keep reading to find out what she had to say.

DOOL spoilers reveal that DePaiva knew that there was an open door to her coming back for another visit. However, when she got the call, she assumed that Eve was going to try once again to break up Jack Deveraux (Matthew Ashford) and Jennifer Horton (Melissa Reeves). When she found out what Eve’s storyline really was, the actress was in complete shock.

“Then I got there and was like, ‘Oh, no! I’ve become a supervillain?’ I read scripts and learned Eve blew up a wedding. It was fun but I was totally shocked.”

Days Of Our Lives Spoilers – How Long Is Kassie DePaiva’s Return?

Days of Our Lives comings and goings don’t confirm the exact length of DePaiva’s stay this time. However, the actress told the magazine that it was a very brief return. So, that ties in with the spoiler that within the next two weeks, Ben Weston (Robert Scott Wilson) will be rescued by Ciara Brady Weston (Victoria Konefal) and Hope Williams Brady (Kristian Alfonso). But that doesn’t mean Eve’s revenge stops there. There will continue to be fallout.

DePaiva also discussed Eve’s perspective throughout this vengeful storyline. As longtime fans know, Eve’s daughter was Paige Larson (True O’Brien), who ended up one of the victims of the Necktie Killer. In the past, Eve has tried to find ways to get Ben thrown in prison but has always failed. The soap star said,

“… there was certainly no closure for Eve. Ben has never paid for what he did. He always says that he was healed but Eve is like, ‘Yeah, right. A couple of doctors may have said you’re okay, but that still doesn’t take away from the fact that you killed, like five people, including my daughter.”

What do you think is going to happen with Eve Donovan and Ben Weston? How will he be rescued and whose side are you on? Do you understand why Eve is going this far to avenge Paige Larson’s death? Or has she finally crossed the line?