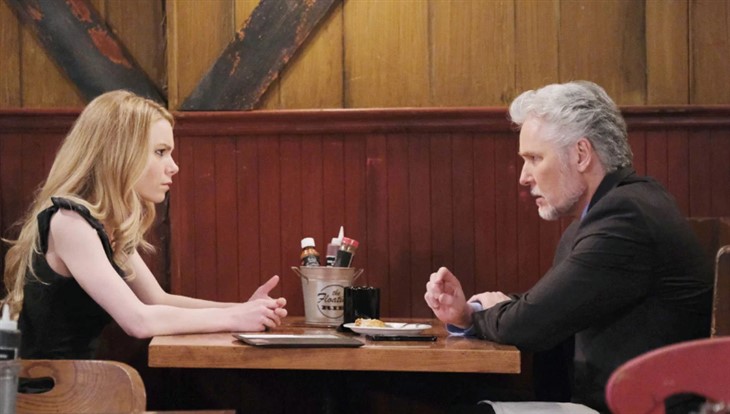 General Hospital spoilers reveal that the tension and drama kicks into high gear on Monday, August 3 when your favorite daytime drama returns with the thrills and chills of all new episodes. A sneak peek video is available for your viewing but we have all of the delicious dirt that goes down right here for you!

Expect to see that sweet like a snake southern lawyer Martin Gray (Michael E. Knight) gets things churning as he grills Nina Reeves (Cynthia Watros) aka Nelle Benson’s (Chloe Lanier) employer in the courtroom drama of the decade in Port Charles.

He wants to know why she hired her and Nina replies that Nelle is a “quick study, a competent and hard worker.” Upon further grilling, she admits that she hired her, “because she deserves a second chance.”

As Martin sweet talks, Willow Tait (Katelyn McMullen) starts to fidget, perhaps sensing that she has already lost. But her lawyer interrupts and the judge kind of agrees, telling Martin to speed things along.

Later Nina talks about the loss of her own child, with Martin talking about how she shares a kinship with Nelle because of it.

Martin keeps hammering away at how well-suited Nina is to judge Nelle’s suitability as a mother and even Michael Corinthos (Chad Duell) starts to look a little nervous.

Of course, fans are waiting for the other shoe to drop—will we get a huge reveal that Nina is actually Nelle’s long lost mom?

General Hospital Spoilers – What happens Next For Nina And Nelle And The Rest Of The Port Charles residents?

We can’t tell you if that shoe drops with a proverbial thud! But all of the signs and signals are pointing in that direction. For starters, there is the matter of the half heart necklace that both Nina and Nelle seem to have a piece of. Nina was told that her daughter, who she previously was told had died, has the other half of the necklace.

Clearly Nelle has some sort of similar necklace to Nina’s, but are they an exact match? Or is this a red herring designed to direct our attention away from the fact that Willow is Nina’s daughter? Anything is possible at this stage of the game GH fans, so be sure to tune in next week when the show returns with a bang!