The Bold and The Beautiful Spoilers: Carter And Zoe New B&B Super Couple! 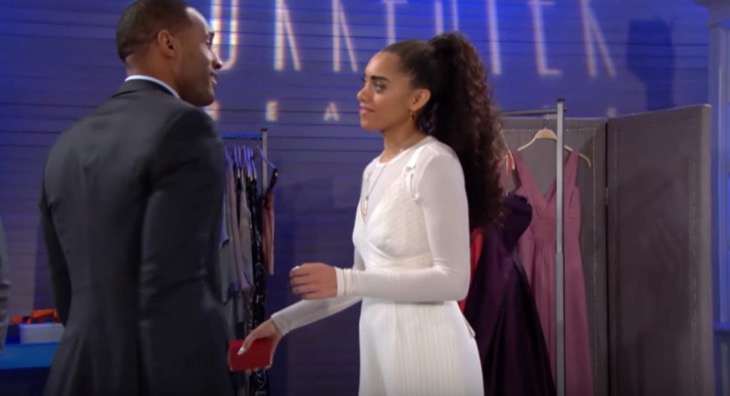 The Bold and the Beautiful spoilers reveal that there will soon be a new couple to root for on the CBS sudser and it’s one we haven’t seen before. Word is that Lawrence Saint-Victor has signed a contract with B&B and in the future, he will be doing much more than officiating weddings!

Well, maybe he will still have time to do his usual lawyerly duties, but he is going to have a romance to occupy his time, something that we have not seen in a long, long time.

The Bold and the Beautiful Spoilers: Zoe Has A Decision To Make About A Man – Thomas Not Out Of The Running

Head writer and executive producer Bradley Bell confirmed the good news that Lawrence is going to get his own storyline in an interview with Soap Opera Digest. When asked if Carter was going to enter into a relationship Bell replied in the affirmative. He went on to share that he considers the handsome and skilled star a great talent and great actor.

When asked specifically about Carter interacting with Zoe Buckingham (Kiara Barnes) Bell replied, “It’s great to launch into another chapter with Zoe and to have Carter in the mix.”

He also referred to the recasting of Zende Forrester with Delon deMetz, indicating that these three characters might become a heated triangle in the future.

B&B Spoilers – There Is A New Zende Forrester In Town

So it certainly seems that there will be some activity on the romantic front for all of these characters, plus maybe a few more to boot as Bell confirmed that members of the Avant family will be seen through the fall months.

The Bold And The Beautiful Spoilers – What Will happen Between Zoe Buckingham And Carter Walton?

We have already seen Zoe and Carter interact and it sure seemed as if Carter liked what he saw! At the time Zoe was not minutely interested in Carter because she thought she was getting married to Thomas Forrester (Mathew Atkinson).

It was Carter who was performing the ceremony and he had to feel awful for her when Thomas left her at the alter to run away and hide from the way he deceived her into believing that he loved her.

Thomas is also back on the scene and said to be a different person, so could it be that Zoe will have her pick of men in the coming days?