The Bold And The Beautiful’ Spoilers: Bill Reeling From Crash Consequences – Katie Supports Her Man 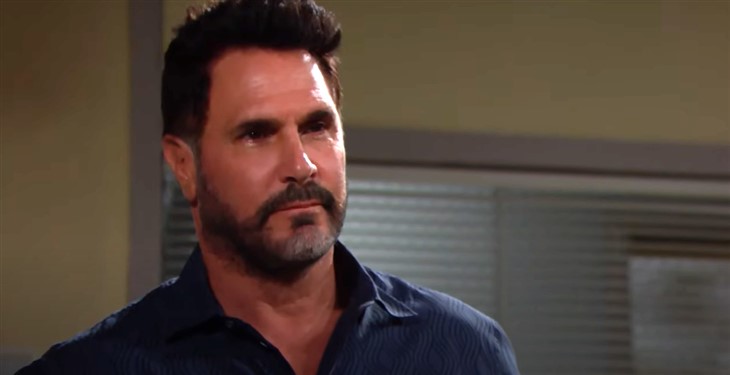 The Bold and the Beautiful spoilers tease that Bill Spencer (Don Diamont) will remain in anguish. The accident that caused Steffy Forrester (Jacqueline MacInnes Wood) to crash her motorcycle wasn’t something that he intended to do, or could have prevented. But Bill blames himself for what happened.

However, something good can come from bad situations. In this scenario, Katie Logan’s (Heather Tom) evolving feelings about Batie will surely be influenced by what Bill’s going through. How she handles the matter will determine the immediate future of her family.

The Bold And The Beautiful Spoilers: EP Teases Ridge’s Shock And Brooke’s Despair

The Bold And The Beautiful Spoilers – Brooke Logan Will Be Available

Buzz indicates that Ridge Forrester (Thorsten Kaye) and Shauna Fulton Forrester (Denise Richards) were married when they were in Las Vegas, Nevada. Richards’ character’s name was altered in the last sentence, based on that assumption.

Following the logic of this parallel storyline, Brooke Logan (Katherine Kelly Lang) and Ridge either aren’t married now, because Ridge filed the already completed divorce papers he was holding, or they will be divorced shortly. That will leave Katie’s sister single.

The use of the word still in this section header was intended as a reminder of Bill and Steffy’s relationships. As viewers have seen through classic episodes and devoted fans already knew, Steffy wanted a relationship with Bill many years ago.

So, Bill is trying to convince Katie that the kiss he and Brooke shared in the cabin meant nothing. Then, this new crisis arises, where another woman Bill has feelings for just so happens to be the person who’s involved in this crash. That alone could be enough of a memory shaker to ward Katie off any considered reconciliation.

The Bold And The Beautiful Spoilers: Steffy’s ‘PhoeBeth’ Trauma Resurfaceshttps://t.co/PypeReI7Bh

The Bold And The Beautiful Spoilers – Bill Spencer Must Be Responsible

Batie fans want Katie to do more than forgive Bill. They want her to insist that he seek counseling as part of an attempt to deal with the reckless pattern of emotional behavior he’s once again exhibited.

Of course, it would be a gamble for Katie to reconcile with Bill, even if he is in ongoing therapy. But the strength of their love and the presence of their young son, Will Spencer (Finnegan George), hopefully, are enough to keep this family together. Katie is the stronger person and has the power to make what can be the best decision for all involved, as long as Bill does his part.