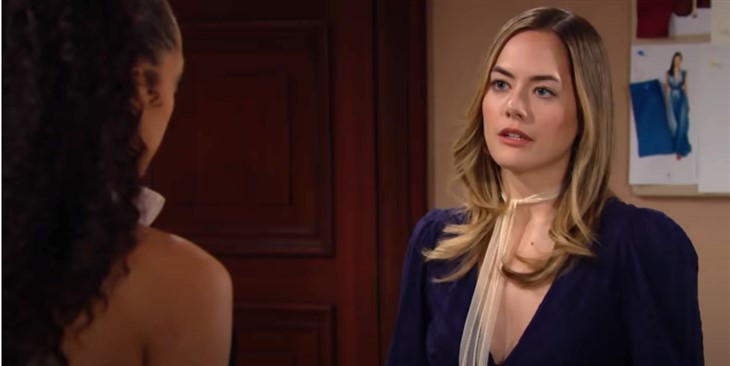 The Bold and the Beautiful spoilers reveal that Hope Logan (Annika Noelle) and Zoe Buckingham (Kiara Barnes) don’t have the best history. After all, Zoe had a part in keeping the truth about “PhoeBeth” a secret. However, the two women will decide to make a pact. Find out what this means and what could happen in the future.

The Bold And The Beautiful Spoilers – The ‘PhoeBeth’ Secret

B&B spoilers reveal that Zoe was part of the “PhoeBeth” secret that caused Hope and Steffy Forrester (Jacqueline MacInnes Wood) so much agony. Zoe’s father was the doctor behind the whole scheme, but Zoe could have exposed it and didn’t. After being punished and blacklisted, she finally has a chance to get her life back. But then Thomas Forrester (Matthew Atkinson) happened.

The Bold And The Beautiful’ Spoilers: Bill Reeling From Crash Consequences – Katie Supports Her Man

B&B Spoilers – Back at Forrester Creations

Once Zoe got her job back at Forrester Creations, she ended up having a relationship with Thomas. While her feelings were genuine, Thomas was just playing her for a fool. It was all a romantic ruse in order for Thomas to get the woman he really desired: Hope. However, the truth finally came out on the day Thomas and Zoe were supposed to be married and Hope played a part in this.

The Bold And The Beautiful Spoilers – Fashion Ambitions

The Bold and the Beautiful spoilers reveal that Zoe doesn’t just want to be a model. Ridge Forrester (Thorsten Kaye) has noticed Zoe’s ambition and figured out she has a career path she wants to take after modeling. It seems that Zoe might get some help from an unexpected source.

In Soap Opera Digest, it is confirmed that Zoe and Hope make a pact. It has to do with continuing to work on Hope’s fashion line, “Hope For the Future.” Will these two put their past behind them to really make a good future for themselves? Or is this partnership doomed from the start? While Zoe made some bad decisions in the past, so has Hope. These two might make a powerful alliance and be able to really help each other out.

There is only one problem. The feud between Hope and Steffy is going to intensify. Since Steffy was responsible for hiring back Zoe, could that put the model’s career in jeopardy when she is forced to take sides? We will have to keep watching the CBS soap opera to see how this story pans out.

The Bold And The Beautiful Spoilers: Ridge’s Ultimatum, Zoe Forced To Choose Between…

The Bold And The Beautiful Spoilers: Thomas Or Finn? Which Man Will Hope Rebound…