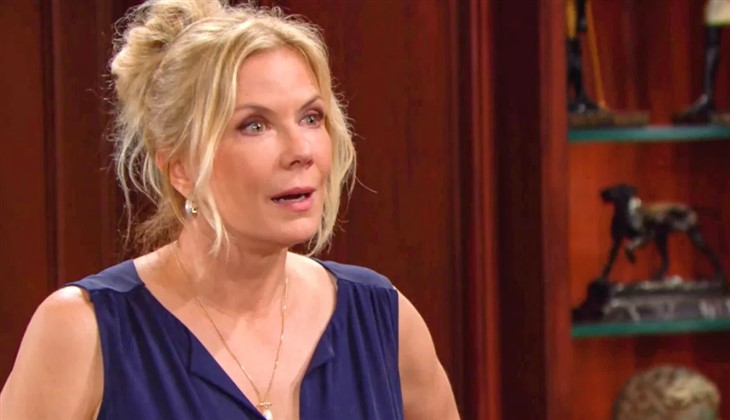 The Bold and the Beautiful spoilers and updates document that Brooke Logan’s (Katherine Kelly Lang) trip to see one of her daughters creates an opening for another storyline to revive. Fans have been waiting since late April to see what, if anything, came of Ridge Forrester’s (Thorsten Kaye) escort of Shauna Fulton (Denise Richards) to Las Vegas, Nevada.

Teasers offered a glimpse of what’s coming next. Apparently Shauna and Ridge exchanged vows during their night on the strip. Clearly, Ridge doesn’t recall that happening, which establishes great drama ahead.

Bridget Forrester (Ashley Jones) is Brooke’s daughter with Eric Forrester (John McCook). Bridget has a son, Logan Forrester (no child actor known to be currently cast for this role), whose father is Owen Knight (Brandon Beemer).

B&B fans know that Jones has occasionally appeared as a guest in recent years. She was last seen at the intended Bridge reunion party. Her son, Logan, wasn’t seen when Bridge appeared earlier this year.

Writing a character away for a short period allows for other connected characters to further other parts of the overall plot. So, savvy soap fans know that having Brooke visit Bridget and Logan is plausible and will allow the Vegas nuptial news to be dropped, with Brooke becoming aware of this shocker in the near future.

Brooke left Los Angeles, California, believing that she and Ridge were separated, but still married. She was actually optimistic about their future because of a parting conversation she had with her assumed husband in Forrester Creations’ executive office.

Ridge, who also appeared to believe Bridge was still married, told Brooke that he wanted to be with her. So, whatever amount of soapy time passed since the late winter and early spring episodes through to when viewers saw new episodes during the week of July 20, allowed Ridge to forgive Brooke.

However, Ridge had signed divorce papers that he’s not known to have filed. So, Bridge is still married, unless someone else handled that task without his authorization.

Flo Fulton (Katrina Bowden) wasn’t sure why her mother suddenly flew in from Vegas. Shauna was coy but did say that she wanted to check in on her and Wyatt Spencer (Darin Brooks) and that LA was her future.

Viewers know that Shauna was planning to reconnect with Ridge. Whether she and Kaye’s character are legally married, meaning that Brooke may have been defeated, remains to be seen.