The Bold and The Beautiful Spoilers: Shauna And Ridge Are Married Or Are They? 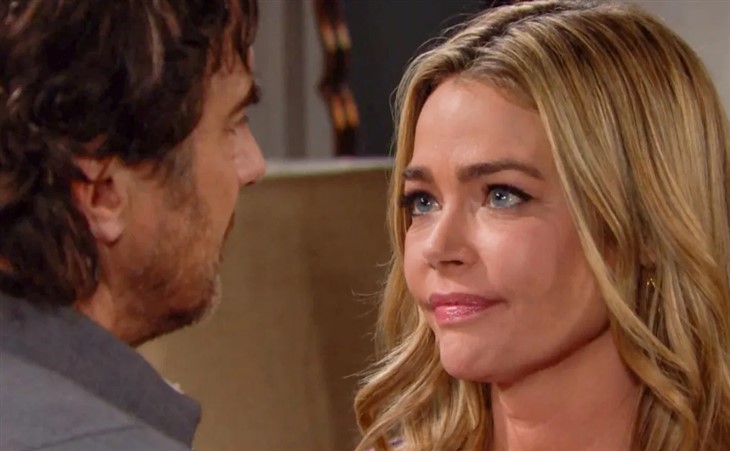 The Bold and the Beautiful spoilers tease that Ridge Forrester (Thorsten Kaye) has an epic dilemma on his hands when he discovers he married Shauna Fulton (Denise Richards)—or did he?

He recently spoke to Soap Opera Digest about his character and the show’s returns to the airwaves and here we have some juicy tidbits for you.

The Bold And The Beautiful Spoilers – Is Ridge Forrester A Bigamist?

Kaye was quick to defend his character and whatever it was that actually went down in Vegas with the former showgirl. “It wasn’t even a weekend in Vegas,” he previews, “It wasn’t really even a night.” He went on to say that poor Ridge’s alcohol guzzling was completely understandable as he had to, “stay hydrated.” We don’t think that Brooke Forrester (Katherine Kelly Lang) will see it the same way, but that’s Ridge’s problem!

Back in L.A. Ridge vows to make it up to Brooke and promises they will work everything out. But then his drinking buddy comes back and drops a bombshell on Ridge, and he may never again be the same.

Brooke goes out of town and Ridge is content that all is well. Until Shauna confronts him with an inconvenient truth. “I guess he just wasn’t paying attention,” Kaye says of his character’s forgetting all about that visit to the Vegas love chapel.

Shauna counters with a marriage certificate and then learns that his divorce from Brooke was finalized. It’s a lot to process for the stunned man and according to Kaye, Ridge isn’t quite sure how to handle his next move.
The Bold and the Beautiful spoilers – Are Quinn and Shauna pulling Ridge’s leg?

In addition to spilling a few details, Kaye shared that it was nice to return to the set where he caught up with his costar Lang, “One of the most beautiful women in the world, sitting there in lingerie waiting for Ridge to come home.”

Now the million-dollar question is, how does Ridge break the news to Brooke that they are divorced and he’s married to Shauna? Some fans are questioning the validity of Shauna’s story, claiming that she and Quinn are actually pulling a fast one on the boozy designer.

The Bold And The Beautiful Spoilers: Wyatt Treats Sally So Differently From Flo – Only Gives Partial Forgiveness #bb #boldandbeautifulhttps://t.co/YuU9uAchw4

What’s the real story? Be sure to tune in and find out as Ridge’s Vegas adventure begins to unravel. Will he finally remember what happened? We sure hope so, for his sake anyway!

The Bold And The Beautiful Spoilers: Ridge’s Ultimatum, Zoe Forced To Choose Between…

The Bold And The Beautiful Spoilers: Thomas Or Finn? Which Man Will Hope Rebound…