The Young And The Restless Spoilers: Nikki Has Family Concerns – Katherine’s Advice Is Missing But Needed 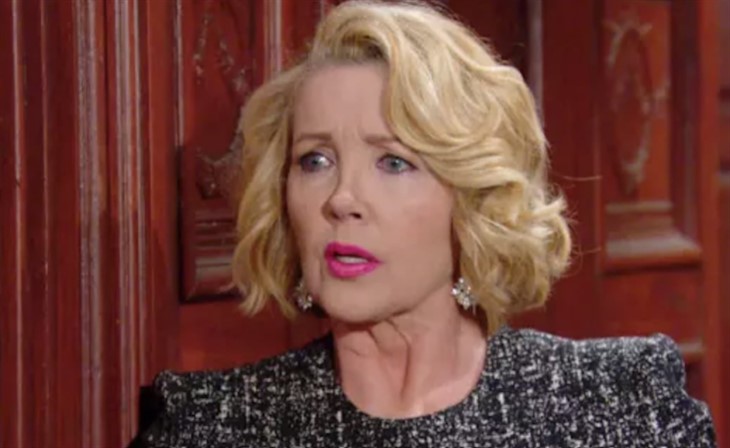 CBS The Young and the Restless spoilers document that Nikki Newman (Melody Thomas Scott) assumed a designation after her friend, Katherine Chancellor (Jeanne Cooper) died in 2013. Nikki has been Genoa City, Wisconsin’s, most prominent lady these past seven years.

Like her mentor, Nikki is a fierce defender of the family. As viewers saw in the first new Y&R episode, which paid tribute to Katherine and Cooper by setting the scenes in Chancellor Park, Thomas Scott’s character remains concerned for her family months after viewers last saw the Newman clan.

The Young And The Restless Spoilers – Vickie Newman Standing Tall

By all appearances, Vickie Newman (Amelia Heinle) has fully recovered from the stab wound she suffered at a lavish gala that honored her father’s accomplishments. Viewers saw a replay of Newman Enterprises’ fiftieth-anniversary party that highlighted Victor Newman (Eric Braeden), with the actor’s fortieth anniversary with the cast being the actual milestone.

Savvy fans know that Victor didn’t actually found Newman Enterprises until the early 1980s. But soap time has always been malleable. What’s not is Vickie’s determination to retain the Chief Executive Officer’s title she earned. But her youngest brother’s destructive persistence could prove to be a major problem for the business Vickie leads.

Nikki is infuriated that Adam Newman (Mark Grossman) continues to attack his father. Grossman’s character lacks any sense of self-awareness. He’s choosing to believe that Victor is pinning the Kansas murder on him as a way to deflect the leverage Adam believes he gained through Alyssa Montalvo’s (Maria DiDomenico) investigative reporting.

Earlier this year Victor told Nikki that the story Alyssa prepared shines a spotlight on the investigation the Kansas authorities conducted approximately two decades ago. Adam has refused to drop his intent to make that issue public and doesn’t believe he was protecting his mother, as Victor claims.

Phyllis Summers (Michelle Stafford) is not one of Nikki’s favorite people. But that factor held zero weight in Nick Newman’s (Joshua Morrow) decision to reignite a relationship with his two-time former wife.

The Young And The Restless Spoilers – Katherine Chancellor’s Counsel Missed

Katherine’s wise council is sorely missing, as it has been these past years. So, Nikki is missing the rock she often leaned on. If the Grande Dame of GC were around, she’d likely tell Nikki to circle the wagons.

Newman’s family drama has been vital to Y&R’s success across four decades. Now, as fans see this iconic group in mid-August of 2020 they know that Nikki will surely prove to be the source that Niktor’s children and the great man himself can depend on to weather the raging Wisconsin storms.