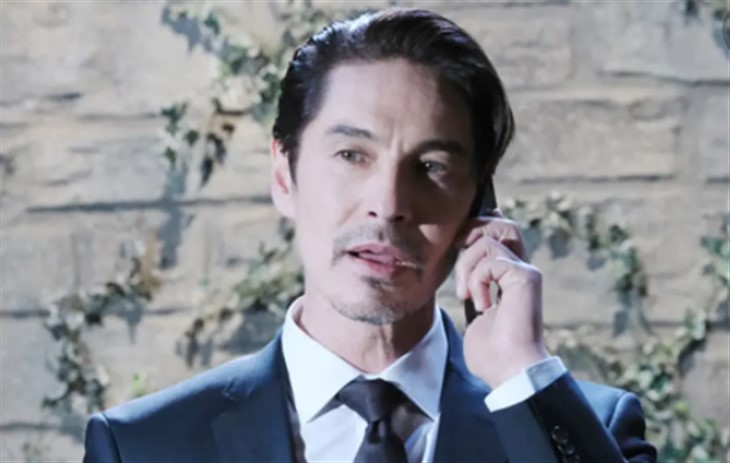 Days of Our Lives spoilers for the week of August 17 reveal that Vincent (Michael Teh) puts the “final nail” in Ciara Brady’s (Victoria Konefal) coffin. With this dire statement, what does that mean for “Cin?” Could Ben Weston (Robert Scott Wilson) actually kill Ciara? Keep reading to find out more about what to expect.

DOOL spoilers reveal that Eve Donovan (Kassie DePaiva) is not happy that her torturous plan was interrupted by Ciara and Hope Brady (Kristian Alfonso). Despite the shoe being conveniently left outside the warehouse door and the place is completely empty, Eve and Vincent apparently never planned to be interrupted. There is no explanation of how everything was removed in a matter of seconds, but that is what viewers are expected to believe.

The next plan is for Vincent to blindside Ben. While Dr. Marlena Evans (Deidre Hall) is grief-stricken over John Black’s (Drake Hogestyn) collapse and grave prognosis, someone else will take over her office. That man is Vincent, who faces Ben as he walks into the office, expecting to see Marlena.

DOOL Spoilers – Powerless To Fight Back

It is teased that there are still enough drugs in Ben’s system where Vincent can regain control of the situation. When Ben sees Vincent, he realizes that he is the man who tortured him. However, before he can react, he is suddenly rendered powerless and sits down in the chair. This is bad news for both Ben and Ciara.

Days of Our Lives spoilers state that Vincent “puts the final nail in Ciara’s coffin.” That is a direct quote from Soaps.com, so we have to wonder what is meant by that. Even though Victoria Konefal is leaving the NBC soap opera, we have a hard time believing that Ben would actually murder his new bride. We do think he will come close, though.

Even though fans are being led to believe that Ciara could end up dead, Robert Scott Wilson indicated something different. He discussed with TV Insider if Ben and Ciara end up happily ever after. While Konefal remained elusive about the possibility and simply said “what is happily ever after anyway,” Wilson implied “Cin” does have a happy ending, but it might not be in Salem.

The actor explained that everyone in that fictional small town will forever force “Cin” to fight harder for their happiness than anyone else. Maybe this was a big clue about what will come in the future.