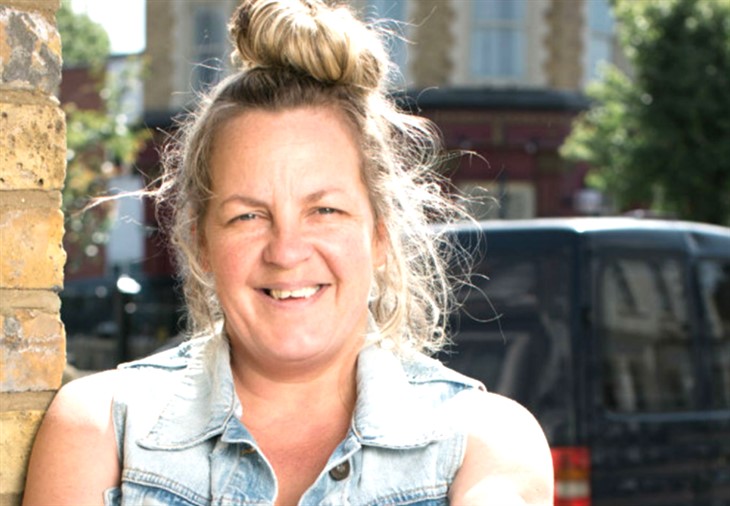 Eastenders spoilers reveal that the Taylor family has a huge storyline when the soap airs new episodes. Lorraine Stanley said it would “challenge” Karen Taylor. Zack Morris, who plays Keegan Butcher-Baker, teased that it exposes dark secrets. Could this be about Chantelle Atkins’ (Jessica Plummer) domestic violence storyline? Will it finally come to an end?

During a segment of Secrets From the Square, Lorraine Stanley and Zack Morris talked about what fans might expect when the soap returns. Stanley said there is something coming up that affects her family which will “challenge” Karen.

Our first thoughts were Keegan being racially profiled and falsely arrested by the police again. Or perhaps Karen not being able to cope with handing baby Kayden over to Sharon Watts (Letitia Dean). However, there is another situation that could impact the family. That is Gray Atkins (Toby-Alexander Smith) abusing his wife, Chantelle.

Eastenders spoilers reveal that Morris teased a bit more information. The actor said that what happens will bring to light some secrets “that have been going on.” The exact working he used indicates that this isn’t an old buried secret, but something that is ongoing.

“Yeah, it’s going to really expose the Taylor family and expose some dark secrets that have been going on.”

The actor also said it would expose the Taylor family. Now, this doesn’t mean the Taylor family is hiding a dark secret, but that they will be closely associated and deeply affected by it. This could mean that one of them isn’t guilty of wrongdoing, but maybe a victim.

Ever since Gray and Chantelle were introduced, viewers have watched in horror as abuse went on behind closed doors. Like many abusers, Gray has a completely separate persona for the public. Nobody would ever suspect he viciously beats his wife. However, we do have clues that the storyline is about to come to an end.

Prior to the soap going off the air, not one, but two people called Gray out on his jealousy. Dotty Cotton (Millie Zero) mentioned it when she found a tracker while the car was in the garage. Literally one or two days later, Suki Panesar (Balvinda Sopal) used the exact same words to Gray, “don’t tell me you’re the jealous type.” Things like that in soaps are never a coincidence.

Now we learn that a dark secret will be revealed, the Taylor family will be exposed and it will challenge Karen. What else could it possibly be but Chantelle’s abuse finally being discovered? Now the question is, how will they handle it?