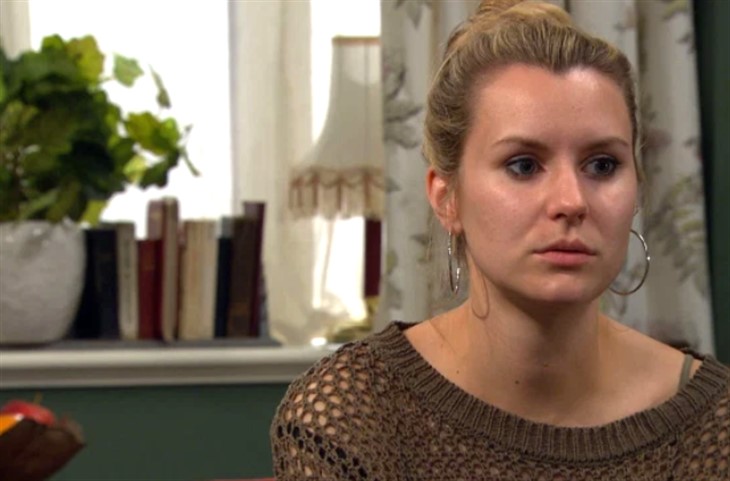 ITV Emmerdale spoilers for the week of August 17 reveal that DI Malone (Mark Womack) targets Dawn Taylor (Olivia Bromley). Meanwhile, Belle Dingle (Eden Taylor-Draper) has a confession to make and Jamie Tate (Alexander Lincoln) tries to negotiate with Nate Robinson (Jurell Carter). Keep reading to find out what to expect to happen on the soap next week.

According to Digital Spy, Monday’s episode will have Malone going after Dawn. He tells the young woman that her testimony about him wasn’t believed. She tries to play it cool, but then he makes a horrifying movie. He pulls out heroin and a syringe from his pocket.

Meanwhile, Gabby Thomas (Rosie Bentham) tells Leyla Harding (Roxy Shahidi) that she feels so lonely since Bernice Blackstock (Samantha Giles) wouldn’t allow her to come to Australia. Also, Nate is angry when he is fired for not attending a meeting.

On Wednesday’s episode, Jamie will talk to Kim Tate (Claire King) on the phone and relay everything that happened with Belle. Then, Nate arrives and is ready to beg for his job back. However, Jamie wonders how much Nate heard.

Later, Nate grills Belle about what she was talking about with Jamie before he arrived. She tries to keep things on the down-low but is compelled to tell say that she knows the person who hit Moira Dingle (Natalie J. Robb).

Emmerdale spoilers for Friday reveal that Jamie tries negotiating with Nate. Dan Spencer (Liam Fox) tries to keep his money woes from Amelia Spencer (Daisy Campbell). He goes into a panic trying to keep her from finding out. Meanwhile, Leyla offers Gabby an apprenticeship. When Gabby realizes that it’s a serious offer, she is touched.

What do you think is going to happen with Dawn Taylor now that DI Malone wants revenge? How much does Nate Robinson hear and what will he do with the information Belle Dingle revealed?

What does the future hold for Jamie Tate as things get more tangled and complicated? Will Moira Dingle find out the truth about who struck her with their car and how will Cain Dingle (Jeff Hordley) react? We will have to keep watching the soap to see what happens next.