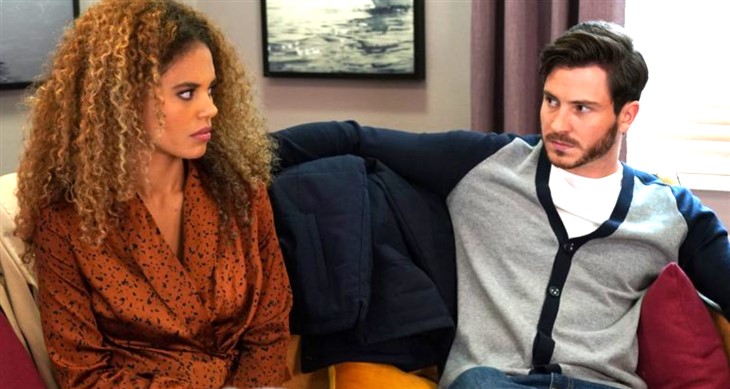 BBC EastEnders Chantelle Atkins And Gray Atkins spoilers hint that Chantelle will take action against her abusive husband when new episodes come back to the screen. The BBC soap has been exploring domestic abuse and it seems that it will also explore the abuse that could happen in lockdown by using the storyline between Chantelle and Gray. Chantelle and Gray have been isolating with each other off-screen for the last three months and this will be explored when new episodes come back on.

Viewers have seen Gray’s abusive behavior towards Chantelle and it is no surprise that the lockdown did not make things better and may have only isolated her more. The UK went under lockdown in March due to the pandemic caused by the virus.

This lead to an increase of calls to helplines that help with domestic abuse. This has caused charities to highlight the importance and need of having more support that would be useful to those who may be in an abusive household during the pandemic. This makes the storyline even more important when it comes to spreading awareness about domestic abuse. So while some may have found the lockdown to be difficult, no one in the show struggled as much as Chantelle has.

The months spent alone with Gray may have pushed Chantelle to the edge and to realize that she has to do something to put an end to the abuse. Chantelle will do this by leaving Gray after setting up a meeting with a divorce lawyer. This may mean that she will fill her family in on what has been going on this whole time.

Gray actor, Toby-Alexander Smith has wanted the show to explore the way that the lockdown has impacted the relationship between Gray and Chantelle. In a talk with Digital Spy, Toby-Alexander Smith said, “The show has been working with Women’s Aid and I’ve been on the phone to them a lot. There’s been a staggering increase in domestic abuse.

I think this lockdown has given people a bit of a wake-up call as to how bad it actually is. It should be at the top of everyone’s agendas. It was incredibly important before, but even more so now. I’ve heard that people are calling up saying that they’re relating to the Gray and Chantelle relationship because it mirrors their own. People are watching it, relating to it, and getting help from it. We’re doing our jobs and that’s why we do it.”