General Hospital Spoilers: Is Valentin The Right Choice For The CEO Of ELQ? Vote Now! 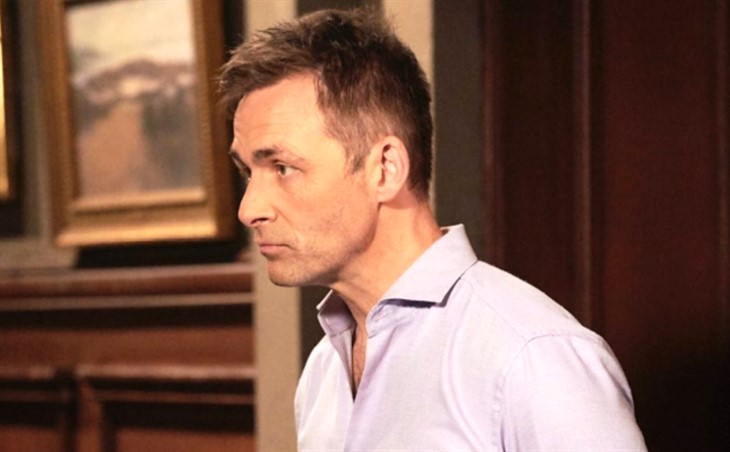 General Hospital spoilers and updates reveal Valentin Cassadine (James Patrick Stuart) has buddied his way into taking over as CEO of the Quartermaine company ELQ. However, is Valentin the right person to be running the company?

General Hospital’s Ned Quartermaine (Wally Kurth) has been so busy trying to hold onto Michael Corinthos’ (Chad Duell) job that he dropped the ball on saving ELQ. Ned was well aware that someone was trying to take over the company. However, instead of following up on this information, Ned has continued to let ELQ twist in the wind.

ELQ became vulnerable and Valentin swept in and bought up fifty percent of the company. Ned is obviously not the best person to be running the company or he would have worked harder to save it. Ned should have checked with the family to assure they still had their stock instead of assuming they did.

General Hospital’s Michael Corinthos (Chad Duell) didn’t know he had a child until a few months ago. Michael asked for time off to get his son settled in at the Quartermaine mansion. Shortly thereafter, Nelle Benson Jerome (Chloe Lanier) sued for custody of Wiley Quartermaine Corinthos (Theo And Erik Olson). Michael has been tied up in court fighting for his son ever since. Michael doesn’t have the time it takes to devote to being the CEO of a company.

Michael barely has time to deal with his son and his new marriage at the moment. Michael’s grandfather is dying as well and he wants to spend time with him. Jason Morgan (Steve Burton) just had an accident. Cyrus Renault (Jeff Kober) recently tried to kill both Michael and his mother, Carly Corinthos (Laura Wright) as well as his father Sonny Corinthos (Maurice Benard). Michael’s life is a little too full right now to give ELQ his full attention.

General Hospital’s Valentin had control of Cassadine Industries until a codicil showed up that took it from him. Valentin is a savvy businessman who tripled Cassadine industries worth in the time he had control. ELQ could use someone to do the same for the company. ELQ is on pretty solid ground despite Valentin’s take over, however, Valentin could certainly improve it’s worth.

However, Valentin is very underhanded, so would he find a way to steal the money instead of putting it into the company? Would he increase his bid for control and try to take stock from the others? Could Valentin somehow change the stock to bearer bonds like was done once before?

Valentin is not a trustworthy man but he is a great businessman. If the Quartermaines can hold onto their fifty percent, or maybe gets someone to change their proxy, later on, Valentin may be controlled. Valentin may not be a Quartermaine but he may be the best person for the job right now.