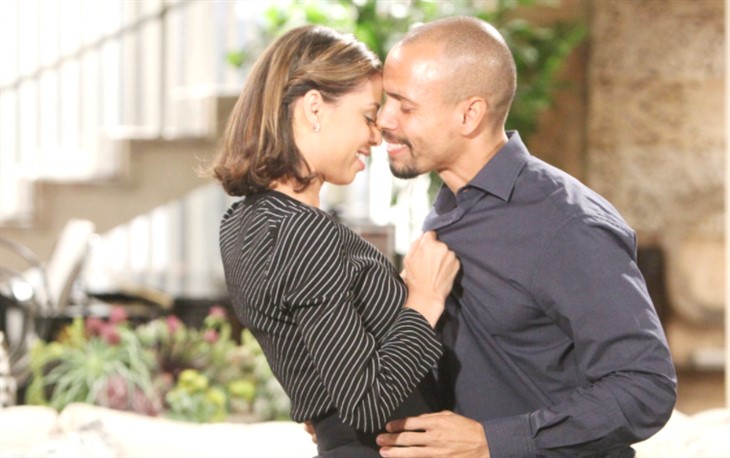 The Young and the Restless spoilers document that Devon Hamilton (Bryton James) and Elena Dawson (Brytni Sarpy) have become one of the most loving couples on Y&R. This pairing was continuing to develop a serious relationship when viewers last saw them.

If there was an odds-on favorite to marry in the relatively near future this particular couple would be near to, or at the top of the list. However, bliss can quickly turn south in the daytime, as longtime soap opera fans know.

The Young And The Restless Spoilers – Confiding In A Trusted Friend

Elena and Nate Hastings (Sean Dominic) are purely friends. If Elena hadn’t formed a bond with Devon it’s reasonable to think that she and Nate would have become a couple.

Nate asked Amanda Sinclair (Mishael Morgan) out in the spring. She said yes and all seemed well. But teasers indicate that Amanda will push Nate off when fresh scenes are shown next week.

So, feeling rejected, Nate will need someone to talk to. The New Hope clinic, where he and Elena volunteer their medical skills, can serve as the setting for that venting session.

Amanda is smitten with Billy Abbott (Jason Thompson), who appears to be the man she’ll actually begin dating as soon as this month, or possibly by the fall. They clicked shortly after she came to town and have kissed. But neither party has pursued their connection beyond the initial chemistry they share.

A deeper personal pursuit will involve something that’s been referenced in the recent past. Amanda’s doppelganger appearance would logically lead to her pursue information regarding her backstory.

Believed to be an orphan, Amanda certainly needs to learn who her parents were. Whether she initiates that effort or someone else does is unknown. But maybe the character who pushes this plot point won’t be Nate or Billy. Instead, how about Devon?

The Young And The Restless Spoilers: Adam And Victor Reach Agreement After Admission Of Guilt https://t.co/CNA9cX6sdl pic.twitter.com/sQk58ms2Ul

Hilary Hamilton (Morgan’s initial character) is, in all likelihood, deceased. It wouldn’t be believable if Y&R has Amanda eventually revealed as Morgan’s original character. Why and how could Hilary have faked her death and then pose as Amanda?

Devon naturally sees Hilary every time he looks at Amanda. He’s made peace with the resemblance and has begun to establish a friendship with her. The easy and smart play would have Devon learn information that leads him on a mission that reveals Amanda is Hilary’s twin sister.

Elena and Nate could become closer while the biology mystery is being solved, sparking Devon’s move to Amanda. Alternatively, Devon’s compulsion to help Amanda confirm her backstory could turn Elena off, with Sarpy’s character then turning toward Nate.