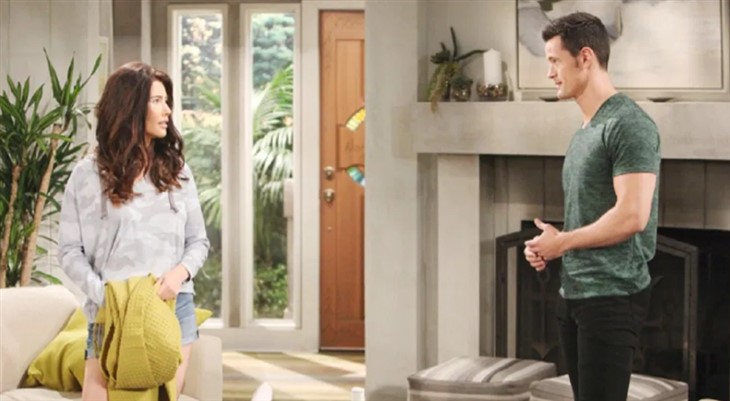 However, the distraction of an unexpected union with Shauna Forrester (Denise Richards) will likely reduce the amount of time Ridge can spend with Steffy during her recovery and affect the decision-making process at Forrester Creations, where Thomas needs oversight.

The Bold And The Beautiful Spoilers: Steffy’s Excruciating Pain Takes Her Down A Dark Path

The Bold And The Beautiful Spoilers – Going Off-Course Once Again

Sure, this is hardly the first time that Ridge has gone off-course. Devoted fans know that he’s experienced many splits with Brooke Logan (Katherine Kelly Lang). Yet they are the mutually proclaimed loves of each other’s lives, with a series of reunions spread across this soap opera’s timeline.

As has been true in the past, the aftermath of a Bridge fallout involves both people naturally needing time to adjust to whatever new reality they’ve entered. In this instance, Ridge has been duped into believing he directed divorce papers to be filed and willingly shared vows with Shauna at a tacky wedding chapel in Las Vegas, Nevada.

Taylor Hayes (Hunter Tylo) remains in Europe. That leaves Ridge as the sole parent who would normally prevent Steffy’s slide into addiction. But Ridge’s world was just upended by the successful ploy Shauna and her coach, Quinn Fuller Forrester (Rena Sofer), pulled off.

Liam Spencer (Scott Clifton) remains a fixture in Steffy’s life due to their daughter, Kelly Spencer (Avalon and Colette Gray). However, Lope’s remarriage and their family, which includes Beth Spencer (Madeline Valdez and River Davidson) and Douglas Forrester (Henry Samiri), takes the bulk of Liam’s time.

Thomas was truly upset by Steffy’s accident, which is an early positive indicator that he’s serious about being a better father and family member. So, Steffy’s extended absence from work will probably create a chance for Thomas to help, rather than take advantage, at FC.

Bold And The Beautiful Spoilers – Thomas Forrester Put To The Test

It would be natural for Thomas to be called upon by his father and grandfather to step up. While he’s been a designer to-date, FC is a family business. This likely gives Thomas an opportunity to be given a temporarily larger role with the fashion company.

The challenge for Thomas, assuming he’s given leadership responsibility in Steffy’s absence and due to Ridge’s period of distraction, would be the newness of his comeback efforts. Yes, Thomas wants to be better. But will his old compulsions take control if his dad isn’t around to keep him in check, Steffy isn’t around, and Eric Forrester (John McCook) is focused on Quinn?