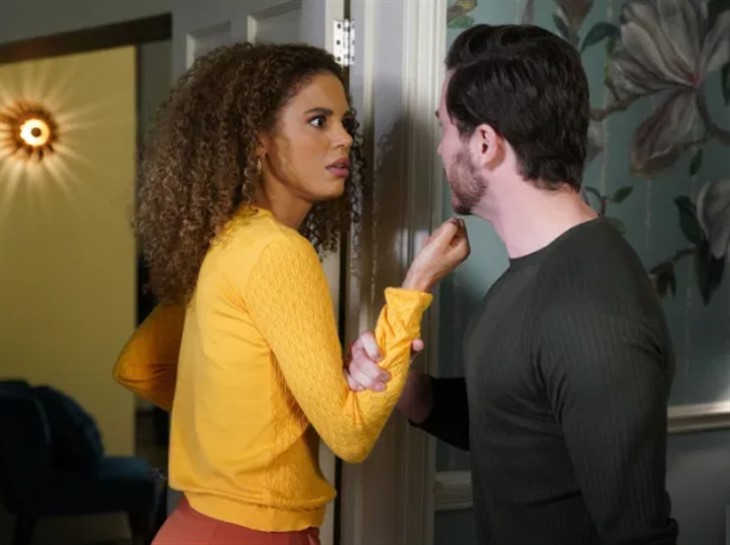 Eastenders spoilers reveal that fans have been waiting for the day when Chantelle Atkins (Jessica Plummer) finally leaves her abusive husband. The lockdown terror was too much and she decides that enough is enough. She leaves the Atkins home and goes to see a divorce attorney. However, it is hinted that Gray Atkins (Toby-Alexander Smith) may not let her go.

For months, viewers have watched in horror as Gray abused his wife. A few months ago, Chantelle received a beating so brutal that fans thought she was dead. She ended up surviving, but could barely get herself off the floor, even when she used the counter for support. We have seen that since then, Gray has taken steps to monitor and control every area of Chantelle’s life. He installed a tracker on the vehicle. He tried to tell Suki Panesar (Balvinda Sopal) that Chantelle was quitting, however, the matriarch wouldn’t accept his word for it.

He is also starting to lose control as both Suki and Dotty Cotton (Millie Zero) questioned if he was the jealous type. The two statements by different characters at separate times in the storyline hinted that Gray’s facade was quickly shattering.

The soap has been working with Women’s Aid and other domestic abuse organizations during this storyline. Statistics show that violence gets worse and more frequent during a lockdown. Chantelle has been trapped inside the house with Gray for the past three months. The quarantine will have her realize that she has to leave and she does exactly that. She starts planning her escape and even meets with a divorce lawyer.

Eastenders spoilers from Digital Spy suggest that Chantelle’s escape might be more complicated than just taking the kids and walking out the door. It is pondered whether Chantelle will be able to get away from Gray.

Unfortunately, many victims struggle getting free because the abusers do whatever is necessary to maintain control and keep their secret. Some use charm, others slander the victim so that they end up looking like the evil ones and others use the kids to force the other partner back — or take full custody so the abused parent has to make a choice. Then there are the abusers who stalk, harass, torment beat, and even kill the victim who left them.

It was teased just last week that a dark family secret will be exposed and it will directly impact the Taylor family. As we previously speculated, the secret was Chantelle’s horrific abuse. On Secrets From The Square, Lorraine Stanley could only say that the situation will definitely challenge her character, Karen Taylor.

What will the family do when they find out what’s been happening to Chantelle all this time? How will they protect her and the children from Gray? And could Keegan Butcher-Baker’s (Zack Morris) simmering rage end Chantelle’s nightmare, but possibly create another one for the Taylor family?