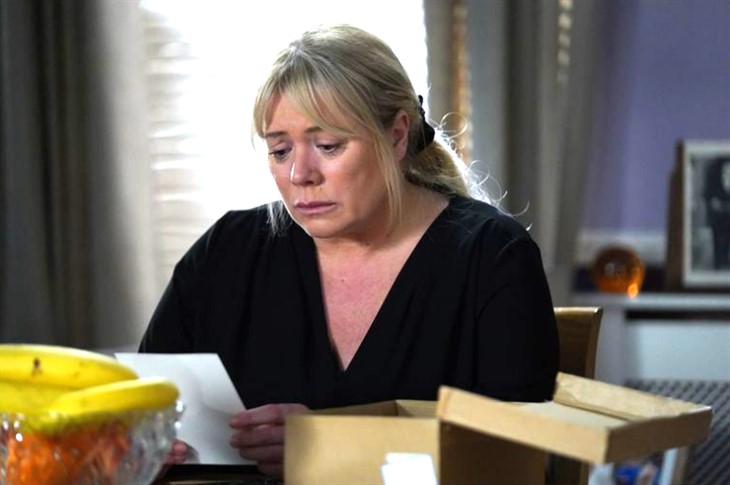 Eastenders spoilers reveal that Dotty Cotton (Millie Zero) will drop a bombshell. She decides that Sharon Watts (Letitia Dean) needs to learn the truth about her son’s tragic death. However, will Sharon believe Dotty’s story or will Ian Beale (Adam Woodyatt) manage to squirm his way out of the bombshell reveal? Keep reading to find out more about what is coming up.

During the 35th-anniversary special, a big death was confirmed, but viewers never guessed it would be Sharon’s son. All of this time, she never had a clue that her number one supporter and good friend killed Dennis. In fact, Ian was going to allow Phil Mitchell (Steve McFadden) to take full responsibility for the tragedy. While Phil going after Keanu Taylor (Danny Walters) did kick off the boat flooding, Ian’s actions were what prevented the boy from escaping.

Eastenders spoilers reveal that all of this time, Ian has kept the deadly secret. Not only that, but he has taken extreme measures to make sure nobody — especially Sharon — finds out the truth. However, Ian kept running into challenges and obstacles. Specifically, a certain person who knew the truth and had proof, but used blackmail instead of giving the evidence to Sharon or the police.

Dotty has threatened Ian before about her intention to tell Sharon the truth. However, he managed to destroy the only evidence that existed. Then, he set her up to be arrested and used that as a way to convince her to keep quiet. He got cocky about it and claimed that when it comes to their two different stories, Sharon is going to believe the man who has been by her side, not a drug dealer.

It seems that after a three-month lockdown, Dotty finally decides that Sharon deserves to know the entire truth about her son’s death. It will definitely be a bombshell, per Digital Spy. Sharon will be shocked, horrified and enraged.

Who Will Sharon Watts Believe and What Happens Next?

Even though it will come as a shock to Sharon, she will be determined to find out the truth. She probably questions Ian about Dotty’s claim and he will try to weasel his way out of taking responsibility. However, we believe that Sharon will realize that the person she has been leaning on the most since the tragedy is the very same one who caused Dennis’s death.

Now, we know that Ian leaves Walford in the near future. However, it doesn’t sound like he goes to prison or is killed. Woodyatt’s exit is temporary and he will actually have a huge storyline off-screen.