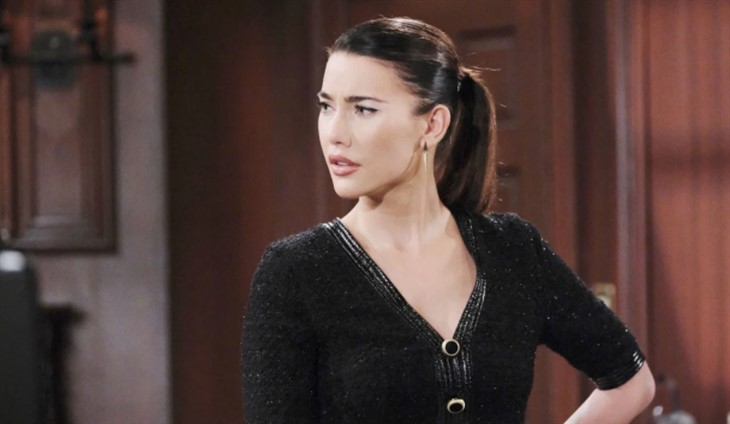 The Bold and the Beautiful spoilers document that Steffy Forrester’s (Jacqueline MacInnes Wood) pain is very real. But she’s out of prescription medication, which may be establishing a dangerous dilemma.

Thomas Forrester (Matthew Atkinson) has taken a genuine interest in his sister’s health. He’s trying to make amends for his many misdeeds and expressed brotherly concern for Steffy regarding the end of her current prescription. Thomas also mentioned something recently that raises a stark red flag.

The Bold And The Beautiful Spoilers – Vincent Walker Sends Gifts

Vincent Walker (Joe LoCicero) sent his best wishes and some gifts to Steffy through Thomas. It’s understood that Vinny knows Steffy from when they were kids, as he and Thomas have been buddies since then. So, Vinny’s gesture wasn’t, in and of itself, troubling.

The point of concern with Vinny is that he’s a known link to illegal substances. Thomas made use of Vinny’s stash in the past when he dropped some type of illicit mixture into Liam Spencer’s (Scott Clifton) drink at the cliff house. That was part of Thomas’ intent to reunite Steam, while he was pursuing Hope Logan (Annika Noelle). That information never became known.

Dr. John Finnegan (Tanner Novlan) is the newly introduced character who was Steffy’s doctor. He’s maintained the connection by befriending Steffy, which has included a visit to her home and various phone calls.

Clearly, Finn could refill Steffy’s prescription. She could take the pills as needed, recover slowly, and then get back to her regular life. But what drama would that offer?

Alternatively, Vinny could supply Steffy with his special pain relief formula. That could come at her request, through Thomas’ suggestion, or by offered directly by LoCicero’s character.

As a seeming storyline tease, Thomas also recently told Steffy that he thinks Vinny has a crush on her. That was new information and elicited a modest smile from Steffy.

The Bold And The Beautiful Spoilers: Tuesday, August 18 – Steffy & Thomas’ Truth Time – Brooke Gets The Last Word Against Quinn & Shaunahttps://t.co/GMAJMW7uQz

Bold And The Beautiful Spoilers – Clashing Over Recovery Plan?

Novlan and LoCicero’s characters could be in the process of being established as vying for Steffy’s affections. Finn’s personal backstory isn’t known. Vinny has spoken of his girlfriend, who he’s visited on various occasions outside of Los Angeles, California.

The developing point of conflict could have up to four people involved. If Finn is the lone provider of medicine, then the Vinny angle may likely prove speculative. But if Finn and Vinny are both seeking to soothe Steffy’s pain, then she’ll have a choice to make that’s health and heart-related.