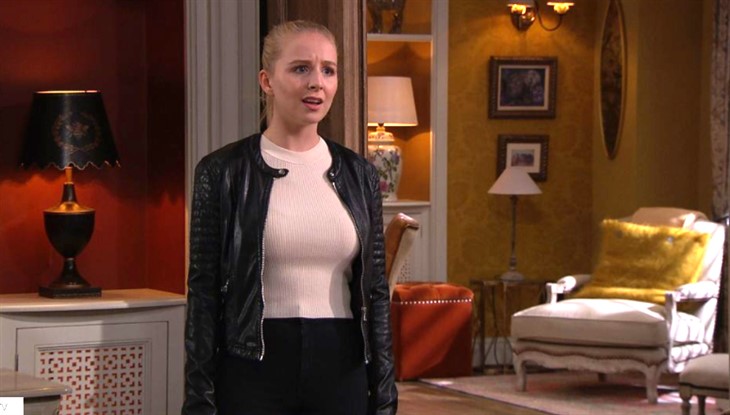 Emmerdale spoilers reveal that Eden Taylor-Draper predicts that heartbreak is inevitable for her character. In fact, she gives Belle Dingle’s odds of having a happily ever after with Jamie Tate (Alexander Lincoln) at “zero percent.” Keep reading to find out what the actress had to say about Belle’s complicated romance.

The first indication that this relationship wouldn’t survive is the simple fact that Belle was tangling with a married man. Sure, Jamie and Andrea Tate (Anna Nightingale) had issues. But the romance should have waited until he was free and clear. Plus, there were the sabotage attempts by Andrea and how Jamie instantly turned on Belle.

When the scandalous messages between Jamie and Belle were on display for everyone to see, Andrea played the shocked victim. Without hesitation, Jamie blamed Belle for the exposure. Not only that, but he threw her mental illness in her face. That is something that nobody should do, even if they do believe that the individual is guilty.

There is also the fact that Jamie was constantly bouncing between Andrea and Belle. Sometimes, he was honest with his mistress about it. Other times, he would let her believe that it was over with Andrea. People like that will always boomerang between lovers. In fact, Eden told TV Times that Jamie messing with both women is reason enough to kick him to the curb.

“The way he has messed her about – and his wife Andrea, too – I think the odds of them living happily ever after are zero percent.”

Right now, Jamie is the one that struck Moira Dingle (Natalie J. Robb) is only known by a select few. One of those includes Belle, who let it slip to Nate Robinson (Jurell Carter). Belle will be consumed with guilt during the week of August 24 when she sees Moira struggling. Then, she finds out about the bribery attempt, which outrages Belle.

“This is a big test of where her loyalties lie. You don’t go against the family, and when you do, you’re out! And actually, when she moves out of Wishing Well to be with Jamie she says to him, ‘They’re done with me.’”

When will Belle Dingle reach the point in which she decides there is no future with Jamie Tate? When will the truth about Moira Dingle’s accident be exposed? Will the Dingle family welcome Belle back after she kicks Jamie to the curb? We will have to keep watching to find out.