Days Of Our Lives Spoilers Next Week: Jake And Gabi Give Into Temptation! 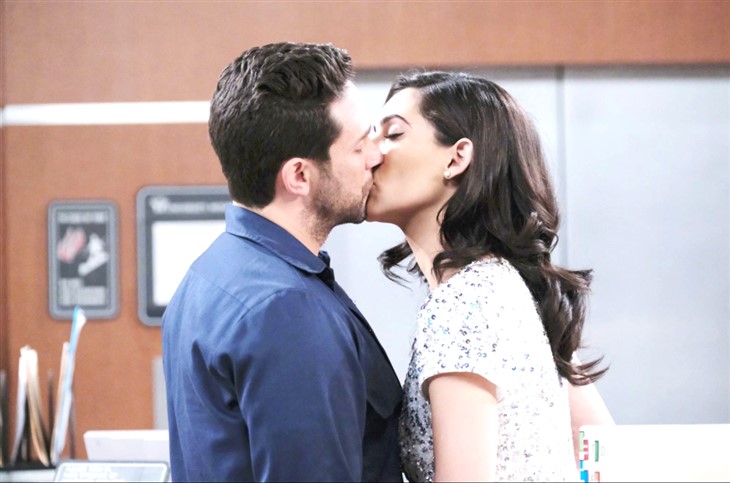 Days of Our Lives for the week of August 24 reveal that Jake Lambert (Brandon Barash) and Gabi Hernandez DiMera (Camila Banus) seem to lash out at each other quite a bit. However, this is the same beginning that the widow had with Stefan DiMera. Just like “Stabi,” Jake and Gabi will give in to their feelings for one another.

DOOL spoilers reveal that when she first saw Jake, she was convinced he was her dead husband, Stefan. Now it is confirmed that Jake isn’t the dead Salemite, but his identical twin brother. With Jake and Gwen Rizczech (Emily O’Brien) now living at the DiMera mansion, this means Gwen has to see Jake’s face every single day. It is a constant reminder of Stefan. While it makes her think of losing Stefan, it also might remind her of the good times “Stabi” shared.

When it comes to Jake, he is just one big, complicated, conflicted man. He seems to play an internal tug-of-war over many things. This includes his on-and-off girlfriend, Gwen. Now, Jake and Gabi certainly do fight a lot. But there are also some nice moments that the two share. It seems that his inner turmoil might have a romantic component to it.

Days Of Our Spoilers – The Problem With Gwen Rizczech

Days of Our Lives spoilers reveal that Gwen just wants Jake, but she is extremely jealous, paranoid and spiteful. When she doesn’t get her way, it’s like a massive hurricane and she doesn’t care who ends up in her path of destruction. While Jake and Gwen do have passion, the relationship seems to be lacking everything else that a couple of needs.

It also seems that Gwen is all about what she wants. She rarely asks Jake what he wants and doesn’t help him achieve his goals. Unless it will mean more money in her hands, of course.

Days Of Our Lives Spoilers Next Week: Sami Confesses To Marlena, Fears She Killed Johnhttps://t.co/ssbj47OmU6

During the week of August 24, Jake and Gwen will find that there is a fine line between love and hate. They are both passionate emotions and just like “Stabi,” Jake and Gabi will give into temptation. Now, how does this change their relationship and what happens in the future?

Where does this leave Gwen? Where exactly do they go from here? We will have to keep watching the NBC soap opera to find out.