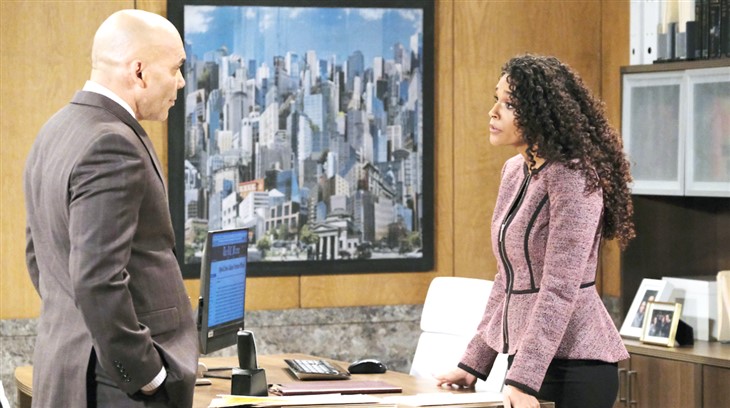 General Hospital spoilers and updates reveal Marcus Taggert (Real Andrews) has known Jordan Ashford (Brianna Nicole Henry) for some time and yet rushed back to Port Charles after hearing Jordan’s speech supporting Cyrus Renault (Jeff Kober). Taggert seems to think that Jordan is getting too close to Cyrus, is he right?

When General Hospital’s Jordan and Taggert worked together, Jordan was deep undercover. Jordan was so deep undercover that Cyrus had no idea that she was a cop. Jordan helped to frame Cyrus for all of the crimes that sent him to prison in the first place. Now Jordan is singing Cyrus’ praises to all of Port Charles. Is Jordan falling into Cyrus’ trap?

General Hospital’s Cyrus is evil. Cyrus is a drug dealer who wants to get involved in every aspect of Port Charles so he can run his drugs through the town. Cyrus has a way of getting people to do what he wants and Taggert is afraid that will work with Jordan too. After all, Cyrus has forced Jordan to work for him so far because of her son. What bother’s Taggert is Jordan’s adamant support of Cyrus. Taggert believes that Jordan is taking it too far and falling back into old habits.

General Hospital’s Taggert has no idea that Jordan did confide in Jason Morgan (Steve Burton) before her last meeting with Cyrus. However, Cyrus might, after all, Jason wrecked his motorcycle shortly after talking to Jordan. Did Cyrus arrange Jason’s accident to get rid of him to get to Sonny or is he suspicious that Jordan confided in him? Will Jordan continue to confide in Jason while trying to take Cyrus down?

General Hospital’s Taggert has promised to stay out of town before he gets charged with faking his death. However, Taggert wasn’t the one who came up with that idea. Taggert supposedly died and now has a new identity, however, a lot of people in witness protect have surgery to change their appearance, but not Taggert. So will Taggert stick to his word and stay out of Port Charles? Will Jordan do something that causes Taggert to blow his cover.

Is Taggert right to think that Jordan could fall into Cyrus’ trap and get caught up in his drug business? Will Jordan stand by and let someone take Cyrus out eventually? Will Jordan perjure herself to help Cyrus in the end? Jordan knows that Cyrus needs to be stopped but will she be able to help put him away in the end?