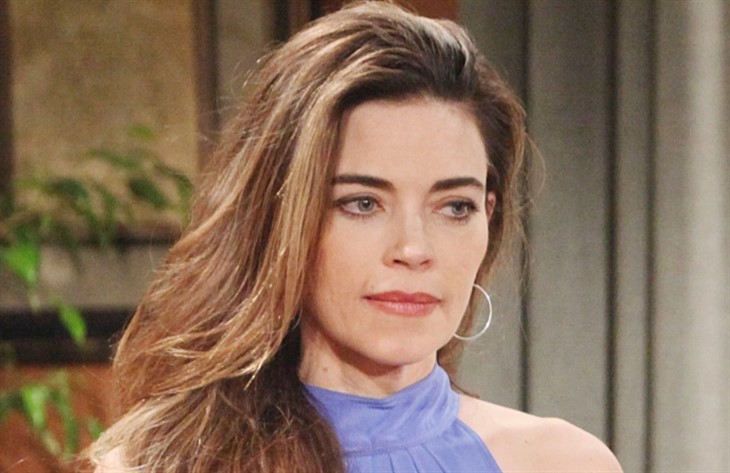 The Young and the Restless spoilers document that Vickie Newman (Amelia Heinle) is making her mark as the restored Chief Executive Officer of Newman Enterprises. She contacted Jack Abbott (Peter Bergman) as part of her first major move, implying to an audience that wasn’t provided with full details that collaboration with Jabot was sealed.

But viewers do know that Vickie is aware of Adam Newman’s (Mark Grossman) revived childhood trouble. She also recently made contact with Billy Abbott (Jason Thompson), which seems to suggest that Vickie is going to leak information through Chancellor Industries’ new media division (being referred to as Chance Com, for a modern effect) to publicly damage her youngest brother.

The Young And The Restless Spoilers: Chance And Adam’s Friendship Tested – Abby And Chelsea Nervous

The Young And The Restless Spoilers – Jack Abbott Was Smiling Broadly

The nickname Smilin’ Jack is one that Bergman’s character has proudly brandished across many soapy years. He was often giddy when impugning the Moustache. In this coming instance, it appears as though Vickie’s actions will be doing the talking, with Jack merely along for the ride.

Jabot has been a beauty industry leader for many decades. It joined with Ashley Abbott’s (Eileen Davidson) My Beauty company last year to play into the synergy between both entities. Jack’s willingness to quickly accept Vickie’s business offer could mean that Newman will be involved in some form of a joint venture that benefits the three parties.

It would seem to make sense that Newman’s previously dormant beauty division would be linked to Vickie’s plans that involve Jack’s all-in approach. If My Beauty is involved, then Ashley will need to provide her okay as well.

Victor Newman (Eric Braeden) and Jack battled each other for decades. Most of Jack’s angst was based on having worked under Victor and the theft of Jabot that took place while John Abbott (Jerry Douglas) was alive.

If Vickie is truly proposing a business connection with Jabot, then her effort is aimed at creating a market splash, with some water wetting Victor at the Ranch. She knows that Jack isn’t someone her father has ever trusted or will. So contacting him before the intended public announcement provides an extra carrot for Jack, helping him to believe that the surprise announcement will have the added impact of catching Victor off-guard.

The Young And The Restless Spoilers – Vickie Newman Makes Her Push

Vickie knows that she needs to assert her power and then keep it. Her short-term goals are profit projections and pizzazz.

Victor was flashy in his day. He loved the money and the power he created, but the founder of this famous worldwide conglomerate also acted with flair.

Maybe when the electricity of what’s about to happen wanes, he’ll offer tacit approval of his oldest child’s gusto? No, it involves Jack, which makes it wrong from the jump. But that’s also part of Vickie’s intent. She wants her father to know that she’s not doing his bidding, but instead her own.