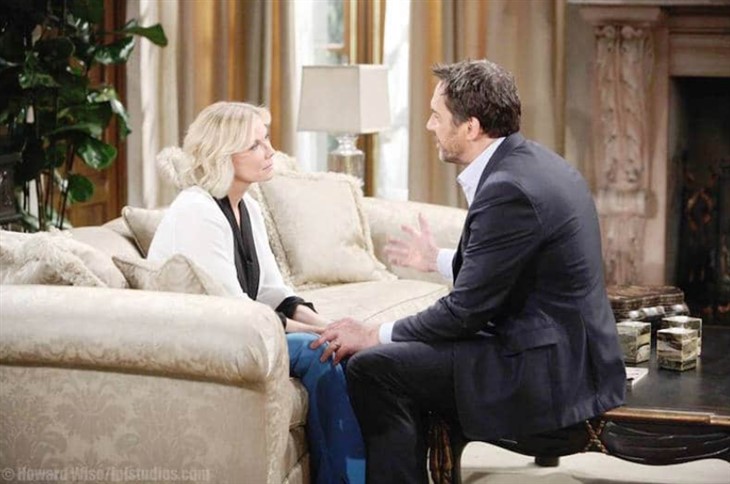 The Bold and the Beautiful spoilers document that Ridge Forrester’s (Thorsten Kaye) pitch worked, temporarily. Brooke Logan (Katherine Kelly Lang) wasn’t initially willing to hear what her true love was saying. But after both sides realized they’d made similar mistakes over time, she eventually agreed to go along with his reconciliation plan.

Ridge wanted to have his new wife, Shauna Fulton Forrester (Denise Richards), sign annulment paperwork. Then, he planned to remarry Brooke so they could resume their famous relationship. But Quinn Fuller Forrester’s (Rena Sofer) efforts will help to counter Ridge’s plan, with the intention of upsetting Bridge’s ability to win Kaye’s character back.

The Bold and The Beautiful News Update: Rena Sofer Has A Special Name For John McCook – Details Here!

The Bold And The Beautiful Spoilers – Bill Spencer Is Vulnerable

Batie would be solid if Katie Logan (Heather Tom) hadn’t seen the cabin kiss. But she did see her sister kissing Bill Spencer (Don Diamont) and so the latest edition of that duo has been on the outs for months.

Being vulnerable hasn’t caused Bill to pursue another woman. But Quinn’s push of Bill toward Brooke will lead to a misinterpreted conversation.

Ridge will think he overhears Brooke talking about her love for Bill. Those words won’t actually represent what Brooke thinks of Bill. Instead, it will reflect that she cares for him and always will.

Shauna knows that Ridge still has strong feelings for Brooke. Richards’ character recognizes that Bridge will always represent a treasured part of Ridge’s life and that he has a child with the lady Shauna referred to as the bane of her existence.

Ridge’s perceptions of what he thought was Brooke’s proclamation about Bill will lead him to take comfort in Shauna’s arms. The likelihood that Shidge’s relationship will deepen beyond the inebriated wedding chapel ceremony is significant.

The Bold And The Beautiful Spoilers – Brooke Logan Unable To Move Forward?

Teasers indicate that Brooke will catch Ridge and Shauna in a compromising situation, or one that doesn’t look good from a Bridge fan’s perspective. Lang’s character will feel that any hope she had of reconciling with Ridge will be dashed.

It will appear as though the words that were shared at Brooke’s house meant nothing and that Ridge is, in effect, cheating with Shauna. With trust broken, Brooke will naturally feel heartbroken.

Unless Katie changes her mind in the meantime, Bill will still be available to Brooke. The chance that Brill revives will increase exponentially as a result. And all the while Quinn will be reveling in the outcomes that her manipulative efforts helped to engineer.