The Bold And The Beautiful Spoilers: Thomas Offers Zoe A Reunion – But Carter’s Winning This Time 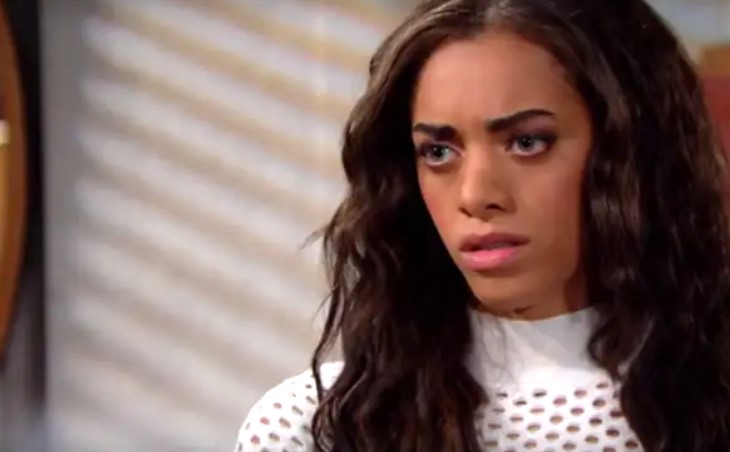 The Bold and the Beautiful spoilers document that Thomas Forrester’s (Matthew Atkinson) desire to redeem himself continues to play out. As Zoe Buckingham (Kiara Barnes) told Carter Walton (Lawrence Saint-Victor) and the audience, Atkinson’s character apologized to her, which was totally warranted.

B&B fans recall that Thomas used Zoe as a fallback bride. His manipulative plan blew up on what was Thoe’s wedding day. He literally left Zoe standing at the altar, where Carter was attempting to complete the ceremony.

Carter’s sincere concern for Zoe is something that she took note of and appreciated. That and the chemistry that’s developed between them gives her a chance to reset her personal life.

The Bold And The Beautiful Spoilers – Thomas Forrester Might Be Real

Based on Thomas’ interaction with his sister, it feels like he actually offered a regretful apology to Zoe. Thomas was probably being truthful when he asked her if she would like to repair their relationship as well.

Zoe told Carter that she cared for Thomas and was hurt deeply by his betrayal on what should have been their wedding day. As viewers recall, Hope Logan (Annika Noelle) donned the dress Thomas designed for her and descended to the ground floor of Eric Forrester’s (John McCook) home, with Douglas Forrester (Henry Samiri) during the ceremony in order to provoke a response from Thomas.

Hope’s plan worked, as Thomas shifted his full focus to Hope and Douglas. He announced to everyone that he actually wanted to restore Thope, which left all observers aghast.

B&B Spoilers – Putting The Past Behind Her

Zoe originally arrived in Los Angeles, California, with the intention of restoring her relationship with Xander Avant (Adain Bradley). He left England after Zoe became too possessive. Her trail of him to the United States felt creepy and was stitched to Zoe’s fixation on a deceased cat.

B&B wrote Buckingham’s character toward sympathetic territory when it was revealed that Reese Buckingham (Wayne Brady) was her father. His actions in kidnapping Beth Spencer (Madeline Valdez and River Davidson) drew Zoe in. She, along with Xander, Flo Fulton (Katrina Bowden), and Emma Barber (Nia Sioux) were threatened by Thomas, who tried to control the information about Beth’s concealed existence in order to engineer his own pairing with Hope.

The Beth reveal and the Thoe wedding fail are in the past. Zoe has been focusing on her career and is ready to open her heart again as well.

‘The Bold And The Beautiful’ Spoilers: Fierce Fallout After Bridge Reunion Collapse – Winner And Losers Emergehttps://t.co/YFjFONPnyj

The Bold And The Beautiful Spoilers – New Couple Has Promise

Coe, Zarter, or some other fused nickname can be chosen when referring to Zoe and Carter’s relationship. That assumes all goes well with the dinner Carter and Zoe have planned as their first date.

B&B needs fresh couples, as do all daytime dramas. This duo has been teased through flirting across various episodes. With Zoe emotionally distancing herself from Thomas and Carter not having any success with Maya Avant (Karla Mosley) in the recent past, this pairing could work. Fans are wishing the best for both characters, who just might become a match.