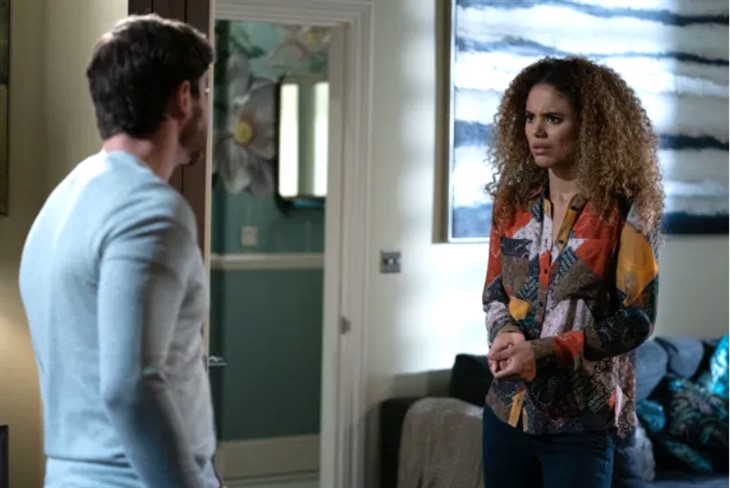 BBC Eastenders spoilers reveal that there is a lot coming up when the soap returns on September 7. For one, Chantelle Atkins (Jessica Plummer) won’t be able to take any further abuse. She makes a bold move to leave her husband. Meanwhile, Gray Atkins (Toby-Alexander Smith) will reach his boiling point. Keep reading to find out more about what to expect.

When it comes to domestic violence, statistics repeatedly indicate that abuse gets worse and more frequent during lockdown situations. In addition to this, Gray’s ego takes a hit once again due to his career. The pandemic caused him to be furloughed and the actor confirmed on Secrets From the Square that it causes a huge dent to Gray’s ego. That is a trigger for the character and the target of his rage will once again be Chantelle.

“Gray’s been furloughed, which is definitely a dent to his ego. So of course, naturally, that brings a trigger for Gray, to get frustrated with Chantelle. Therefore, I imagine he’s pretty much at boiling point.”

Eastenders spoilers reveal that the abuse that Chantelle endures during the lockdown proves to be too much. She finally reaches her breaking point and knows that she has to get out, not just for herself, but for the children. She makes plans to move out and go see a divorce attorney.

Plummer also talked about Chantelle and Gray’s relationship. For the past few months, the couple has been together during the lockdown. Due to Chantelle basically being trapped with her abuser, it makes the wife and mother think hard about her life. The actress explained that Chantelle ends up finding her “inner Taylor.”

It is speculated that Gray won’t let go of Chantelle that easily. She might have plans to move out and meet with a lawyer, but Gray always manages to get the upper hand. How will he deal with his abusive secret getting out? How will he control a situation that he suddenly has lost control over? We will have to keep watching the soap to find out what comes next, but hopefully, Chantelle can finally get her freedom.