The Bold And The Beautiful Spoilers: Ridge And Shauna Destined To Fail – Brooke Wrecked By Initial Fallout 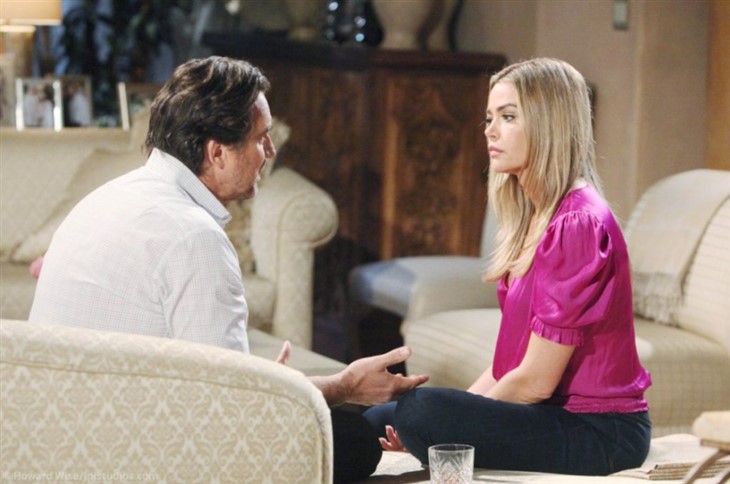 CBS The Bold and the Beautiful spoilers document that Ridge Forrester (Thorsten Kaye) has turned to Shauna Fulton Forrester (Denise Richards). But his decision is based on a few lies that are bound to come out.

The Bold And The Beautiful News Update: Henry Joseph Samiri Is An Ace In The Kitchen

In the meantime, Brooke Logan (Katherine Kelly Lang) believed for a few hours that her relationship with Ridge was saved. But what seemed like a miraculous turn of events quickly turned negative through one misunderstood conversation.

The Bold And The Beautiful Spoilers – Devastating Fallout From Impulse Decision

The audience understands why Ridge reacted so emotionally, changing his plan to have Shauna sign annulment papers. He overheard Brooke telling Bill Spencer (Don Diamont) that she would always love him.

But Ridge’s decision to return to Brooke’s bedroom, rather than remain hidden on the staircase, resulted in him missing what was said in full. Brooke finished her thoughts by telling Bill that Ridge was the man she loved more than any other.

Bill was sorry to hear that, thinking that he had a chance to revive their relationship. Ridge would have been overjoyed had he stayed. But he didn’t and the agreement he made with Brooke, to revive Bridge a handful of minutes earlier, was broken.

Shauna was uncertain if Ridge was ever going to truly be her husband. She thought that his history with Brooke and the questions he had about the manner in which they were married would doom their legal union.

But Quinn Fuller Forrester (Rena Sofer) disagreed. She insisted that aiming at Bill at Brooke was exactly what was needed. Quinn’s instinct played out as she thought it would, but in a way that isn’t yet known.

Ridge’s return to his father’s home, where Shauna was waiting, gave Shidge it’s the official start. The image of Quinn, secretly watching from across the living room, was also touching for all non-Bridge fans.

The Bold And The Beautiful Spoilers – Ridge Forrester Shares Responsibility

What if Ridge wouldn’t have gotten drunk at Bikini Bar last summer and rejected Carter Walton’s (Lawrence Saint-Victor) offer to help him leave? Well, Shauna wouldn’t have had her first personal encounter with Ridge that day.

What if Ridge hadn’t chosen to down far too much alcohol in Vegas with Shauna? In that scenario he wouldn’t have set his cell phone down, which Shauna used to text Carter, causing the Bridge divorce papers to be filed. And, Ridge wouldn’t have agreed to marry Shauna at her friend’s wedding chapel either.

All of the above makes him responsible for part of his current troubles with Brooke. She owns the rest, including the cabin kiss, which was in Ridge’s mind when he overheard a conversation where Brooke appeared to tell Bill that she loved him.