The Bold And The Beautiful Spoilers: Bill Does What Quinn Hoped – Ridge Doesn’t Realize He Was Setup 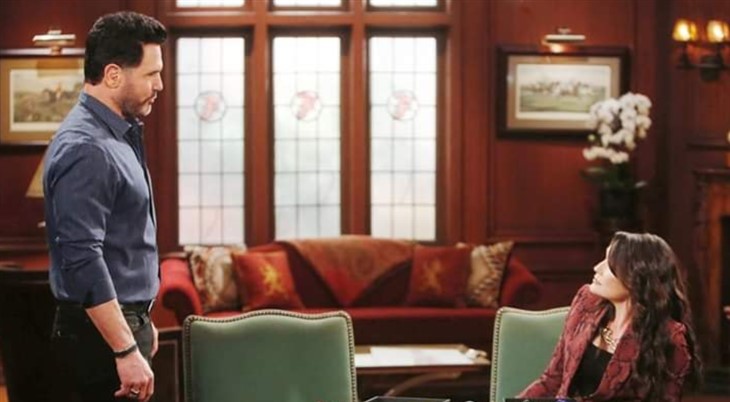 CBS The Bold and the Beautiful spoilers document that Bill Spencer (Don Diamont) allowed himself to be emotionally manipulated. He did what Quinn Fuller Forrester (Rena Sofer) hoped, in once again disrupting Bridge.

Brooke Logan’s (Katherine Kelly Lang) partial conversation with Bill, who unexpectedly arrived at her house, proved devastating. In a classic moment of soapy plotting, Ridge heard part of what Brooke told Bill but left before Lang completed her lines.

The Bold And The Beautiful Spoilers: Thomas Offers Zoe A Reunion – But Carter’s Winning This Time

The Bold And The Beautiful Spoilers – Quinn Fuller Forrester Is Outrageous

Quinn just can’t help herself. She masterfully played Bill, mixing partial admissions of her full intent while also pushing every Brooke button that’s inside his heart.

It’s understandable that Quinn has remained mad at Brooke for telling Eric Forrester (John McCook) that he should leave his wife. Lang’s character also said that Quinn and Shauna Fulton (Denise Richards) should be kicked out of the mansion and go back to Las Vegas, Nevada.

Katie Logan (Heather Tom) is actually Bill’s first choice right now. It’s debatable as to whether he loves Katie or Brooke more. He’s been married to both but shares a child with Katie. Plus, he’s been wanting to reconcile with her for months.

However, Katie’s understandable dismay is a factor that can’t be discounted. Bill knows that he caused the latest Batie rift. He’s also read the signal Katie was sending by limiting interaction with him whenever he visited with Will Spencer (Finnegan George).

So, Brooke’s availability was seen as a way for Bill to fill the gap in his life. Bill isn’t happy without a companion or soulmate, or however one wants to term what he feels for Katie, Brooke, or both sisters.

The Bold And The Beautiful Spoilers: Wyatt And Flo Take Sides Over Mama Drama, Splitsville Ahead?https://t.co/5RSO3hDsNW

Brooke was not lying to Ridge when she told him that kissing Bill in the cabin meant nothing to her and that Brill wasn’t reviving. The full text of her statement to Bill ended with her telling him that Ridge was the man she loved.

Ridge’s hidden presence during the unexpected talk Brooke had in her living room with Bill wrecked a developing Bridge reunion plan. Brooke didn’t know Ridge returned to her house, placed a flower in her bedroom, and was about to come back down the staircase when he overheard her and Bill talking.

So, the apparently doomed reconciliation is off. Ridge will likely remain with Shauna, leaving Brooke alone. As for Bill, he now thinks there’s no chance to restore Batie or Brill.