The Bold And The Beautiful Spoilers: Carter Helps Zoe Forget About Her Past 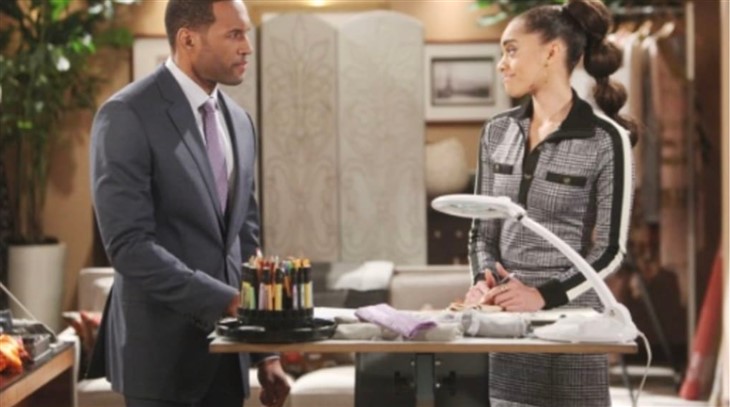 CBS The Bold and the Beautiful spoilers indicate that Carter Walton (Lawrence Saint-Victor) will give his new love interest Zoe Buckingham (Kiara Barnes) a reason to what to forget her past. That’s because two of them are about to share a passionate kiss together. Here’s what you need to know.

The Bold And The Beautiful Spoilers: Ridge And Shauna Destined To Fail – Brooke Wrecked By Initial Fallout

According to the latest edition of Soap Opera Digest, things will be getting rather heard between Zoe and Carter, who will end up locking lips in no time. This comes after Zoe was absolutely humiliated by her almost-husband Thomas Forrester (Matthew Atkinson) when he told her on their wedding day that he was still in love with Hope Logan (Annika Noelle). In fact, Thomas was only marrying Zoe in the hopes that he could make Hope jealous.

Knowing that she has just been through an emotional rollercoaster, actor Lawrence Saint-Victor, who plays Carter on the hit soap, puts it this way, “She kind of takes his breath away but at the same time, he’s trying to play it cool. When Zoe was with Thomas, Carter knew that at some point the truth would come out. Carter knew that Thomas was still all about Hope, but he also knew that that was something Zoe needed to learn for herself. He couldn’t just tell her that, even though he did try to be there for her. Now that’s all over with, he’s happy to help her move forward.”

B&B Spoilers: Fans Will Soon See A Different Side To Zoe Buckingham

As far as that kiss though, Lawrence says that he doesn’t want to give anything away, but does reveal that it will be a special moment shared between the two of them.

The actor explains, “It’s been a long time since Carter has put his heart on the line, all the way back to his engagement to Maya. He’s not the kind of guy who just goes after any pretty girl he sees. But he realizes there’s a lot more to Zoe than meets the eye and Carter is definitely looking forward to getting to know her much better.”