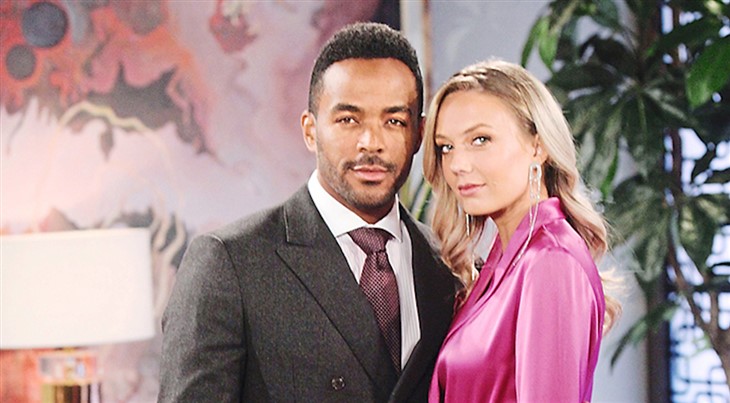 CBS The Young and the Restless spoilers tease that major revelations will rock Genoa City this fall and when the dominos stop falling, nothing will ever be the same again for one lovely lady lawyer.

In fact, her story will ripple out to affect other characters as her past comes back with a thud and a bang.

Whatever we know at this moment about Amanda Sinclair (Mishael Morgan) pales in comparison to what we are about to find out!

And, in a shocking twist of fate, a character who came and went will return and his appearance means everything.

The Young And The Restless Spoilers: Sharon Rushes To Save Adam – Chelsea Furious!

Here’s what we know so far: Amanda discovers a jaw-dropping revelation about her past. But we also know that among the four characters listed above, an epic storm of revelation, romance, and desire will unfold.

How does Amanda figure into this maelstrom of emotional drama?

Y&R Spoilers – What Happens Next To Hot Couples In Genoa City?

First, we have another shocker for you: Jared (Michael Maclane) will return, and we know that it will provide a stunning catalyst for a bombshell turn of action.

As well, TPTB is spilling that the four characters mentioned will confront desire and romance—how the pieces all fit together is really anyone’s guess at this point!

The Young And The Restless Spoilers – Who Is Jared And Why Is He Important?

What we can fill you in on is the identity of Jared—as far as we know it! He was a young man who was treated for a cut by Nate, Devon, and Elena Dawson.

He said he grew up in foster care and the trio tried to help him out. Later Amanda entered the picture and also felt sorry for him since she also grew up in the system. Later Jared’s caretaker, his grandfather, died in the hospital and the residents tried to further help him.

The Young and The Restless #YR Spoilers and Rumors: Eileen Davidson Returns To Y&R Full Time?https://t.co/nraFHGmx2o

We haven’t seen him for a bit, does his return mean that he has a connection to Amanda’s life? How will he be the cog that influences so many Genoa City lives? One thing is certain and that is that this plot has a ton of potential to knock fans’ socks off.