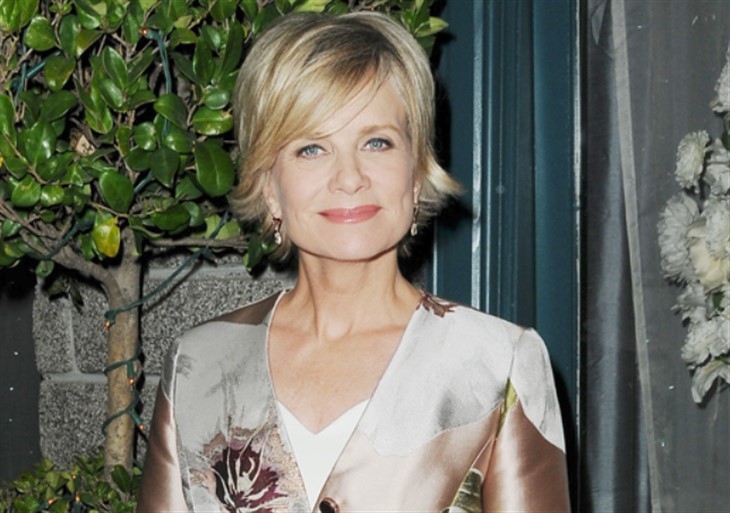 NBC Days of our Lives spoilers reveal that the world of daytime drama is a small world, and Mary Beth Evans has a funny story to prove it. She plays Kayla Brady on NBC’s Days of our Lives and she recently recalled an early morning encounter with Peter Bergman who stars as Jack Abbott on CBS’s The Young and the Restless. Apparently the two actors live in the same neighborhood but had no idea they were about to meet up.

She shared the story with Soap Opera Digest and you won’t believe her nickname for Bergman! It seems these two-star actors live in the same neighborhood and by chance, she ran into him one morning about a year ago. She was out getting a newspaper, “early, early in the morning.” She had no idea she would encounter the handsome and talented star that day and in fact, she didn’t expect to see anyone that early.

According to the actress she was, “practically in my pajamas, and he was, you know, polo top, aftershave, hair … Mr. Clean from the get-go!”

He asked her how she was, and she shares that years ago his wife and her husband worked together.

Mary Beth said she was, “kind of cowering,” because of her uber casual attire while Bergman was so calm, cool, and collected at that hour of the morning. Still, she thought he was terribly cute and sweet!

Days Of our Lives spoilers – What Were Mary Beth Evans And Peter Bergman Doing Early In The Morning?

That’s a great story and one that seems to back up the, “it’s a small world theory.”

Both stars have been on their respective soaps for eons, and the shows would not be the same without them. As Kayla, Mary Beth has spent her life loving Steve Johnson (Stephen Nichols) and the good news is that they are once again back together and happy.

There is also fabulous news for Stayla fans as they are about to soon be featured. That’s because his son Tripp Dalton (Lucas Adams) is set to return to town. The rumor mill is wild with speculation that once there, Tripp will discover that he is Allie Horton’s (Lindsay Arnold) baby daddy!

Days Of Our Lives (DOOL) Comings & Goings: Jan Spears Back With A Bang – Sami Stirs Up Mega Dramahttps://t.co/QKiTDbJWxQ

What do you think DOOL fans, are Stayla about to get some grand grandbaby news?