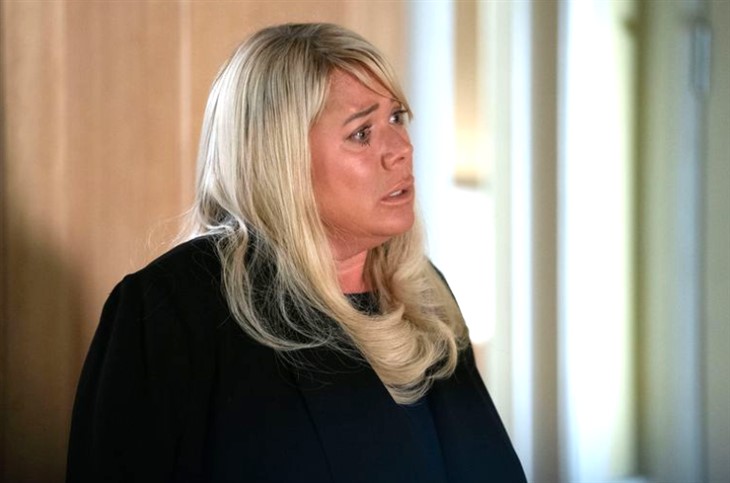 BBC Eastenders spoilers reveal that Sharon Watts (Letitia Dean) and Ian Beale (Adam Woodyatt) are having a “blissful” time in lockdown together. However, that will come to an abrupt end for a few different reasons. One is the reminder of Dennis Rickman’s (Bleu Landau) death and the other is Dotty Cotton (Millie Zero). Keep reading to get the details.

EastEnders Spoilers – Suki Arrested For Vinny’s Crime? Who Will Save Panesar Matriarch? A Blissful Lockdown

While Ian and Sharon are in lockdown, they are having a “blissful” experience. Ian will do anything for Sharon with the exception of telling her the truth about his role in her older son’s death. However, when the restrictions are eased and everyone starts to come out from months of lockdown, things will drastically change.

Suki Arrested For Vinny’s Crime? Who Will Save Panesar Matriarch? Investigation Wraps Up

According to Inside Soaps magazine, Dean explained that the police will wrap up their investigation of the boat tragedy that resulted in Dennis’ death. This will be a huge reminder to Sharon of the life that was lost on that fateful night. She told the magazine,

“It’s very hard for Sharon. She is immediately reminded of the boat crash and Denny’s death. She’s been happier recently, but this takes her right back to the pain that is sitting just under the surface. Sharon is still so fragile, so something like this is bound to set her off. It’s going to take a very long time for her to really be okay.”

As for Ian, he is acting like everything is perfect. However, deep inside, he harbors a lot of guilt and is desperate to keep his secret. If Sharon knew the truth, it would destroy everything and he wants to make sure that doesn’t happen. He is the hero in Sharon’s life right now and won’t allow anyone or anything to ruin that. However, he is going to end up having a false sense of security when the investigation ends. He also thinks Dotty isn’t a problem anymore, but he’s wrong about that.

It is confirmed that the soap will return on September 7. When it does, everyone will be coming out of lockdown and interacting with one another again. For all this time, Dotty has probably been consumed with the thought of what to do about what she knows.

It is stated that Dotty will end up bursting Ian and Sharon’s blissful little bubble. That can only mean one thing — that she tells Sharon the truth. However, will she even believe Dotty’s story? How will Ian handle this shocking turn of events?