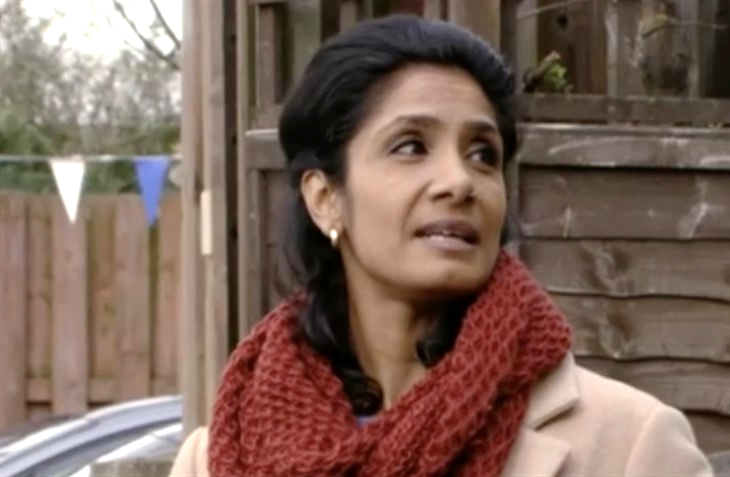 BBC Eastenders spoilers reveal that Vinny Panesar (Shiv Jalota) and Ruby Allen (Louisa Lytton) will come to an agreement on a robbery and insurance scam. Ruby is desperate as her identity has been stolen. However, it goes wrong and Suki Panesar (Balvinda Sopal) saves Vinny. But she could end up paying the price. Who will end up saving her if she gets arrested?

It was previously teased that Ruby will end up in a financial mystery. We now know that her bank balance is so low because someone is making purchases with her account information. Plus, her entire identity has been stolen. Due to this, she doesn’t even know if she’ll be able to open the club back up after lockdown restrictions ease up. This leads her to make a horrible decision.

Eastenders spoilers reveal that Vinny has an idea and Ruby is tempted by it. Due to her dire financial situation, Ruby agrees to the “convenient robbery.” She lets Vinny know when the club will be empty and that the safe is full of money. So, he goes wearing a disguise and goes into action. While he is doing that, Ruby changes her mind and tries to contact him to call the robbery off. However, it is too late and things go horribly wrong.

It is teased by Digital Spy that Vinny calls Jags (Amar Adatia) for help when the robbery situation gets out of control. However, he ends up having to deal with Suki! She orders him to hurry up and get out of the club as she tries to fix Vinny’s mistake.

Eastenders spoilers suggest that in her determination to save her family, Suki could end up being discovered at the club. If this happens, then could Suki be the one to get arrested for attempted robbery? If so, how will Ruby and Vinny handle this situation? Will they allow Suki to pay the price for a crime she didn’t commit?

Or will they come forward and admit their plan so an innocent (yet, scandalous) woman doesn’t pay the price? We will have to keep watching the BBC soap opera to find out what happens with this storyline.